Drawing from history but adding countless fantasy elements is Jeanne d’Arc a game for the PSP in the tactical role playing genre. Choosing to focus on smaller combat engagements there is all the depth you need to stay invested from start to end. 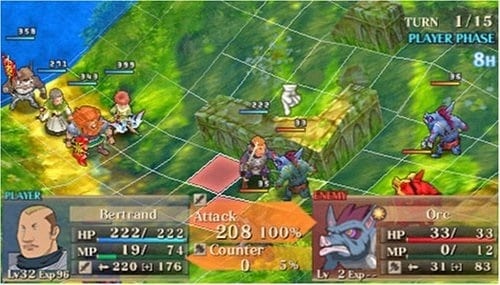 The heart of the story line is the 5 magical armlets that were created in the past by powerful heroes to help them in the great war that was fought against the demon army. Fast forward hundreds of years a new war has now arisen between the French army and the demon controlled English military. This is where Jeanne comes into the picture after discovering one of the magical armlets she takes it upon herself to lead the French to victory.

In order to do this players will travel the fantasy game world (somewhat reminiscent of a historical France) in order to rid the locations of Orcs and other dark creatures. These battles vary in size but generally involve up to 5 allies that each come with their own skills and stat development which can be further customised through all sorts of weapons, armour and skill gems which are found from fallen foes.

Combining these standard tactical elements with a simple rock-paper-scissors affinity system there is enough strategy to sink your teeth into from start to end without ever being overwhelmed. The unique combat elements of Jeanne d’Arc are limited to Jeanne and a selection of other party members. 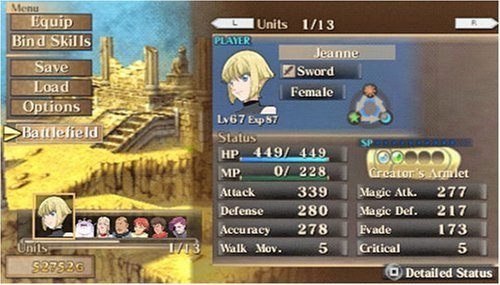 These special characters can use the powerful magical armbands to activate gem powers once per battle. Jeanne’s first such special power for example is the ability to take extra turns after killing an enemy. With the number of these gem powers expanding throughout the adventure they are a cornerstone of your tactical strategy.

Jeanne d’Arc is undoubtedly the best game in this space for PSP owners, it has just enough depth to keep things interesting but never tries to overwhelm the player with fancy and unnecessary mechanics.

Games Finder is a Steam Curator and featured in the aggregate review scores data of MobyGames and Neoseeker.
FEATURED ON
Games Like Advance Wars, Games Like Fire Emblem, Games Like Ni no Kuni, Games Like XCOM
LEAVE A REPLY Cancel Reply