Conquer over 1,100 levels across various scenes in Jewel Match King, a free to play puzzle game that lets you play offline to ensure lack of internet or data don’t stop you from getting a puzzle matching fix. 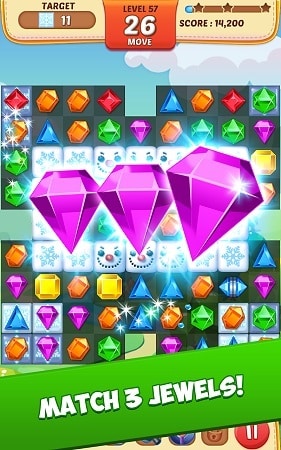 Wasting no time in getting players into their first few games levels players are tasked with scoring a certain number of points within a limited number of moves. As is common for the genre your objective as you advance will use a mixture of mechanics, such as requiring players to clear certain obstacles from the game board.

Regardless of your level objective though you’ll find a common limiting factor, the number of moves that you have available. To assist players in still overcoming levels you’ll be rewarded with special jewels to clear the game board when players make a match of more than 4 coloured jewels.

This includes the line jewel which can clear an entire line from the board, the bomb that detonates jewels in a small area and the rainbow jewel that can completely clear an entire colour. These also serve as the game boosters by allowing players to start with one on the game board to give you an explosive start to the next level. 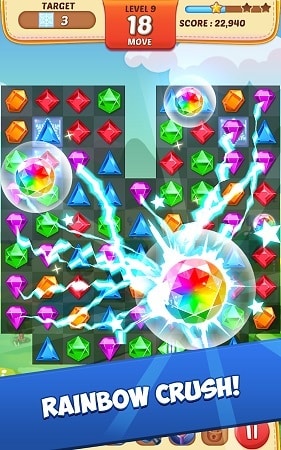 Additionally boosters can be accessed from within the level such as extra moves or a hammer to smash out a single obstacle on the game board. All of your level clearing efforts don’t go unrewarded either with coins being rewarded based on the number of stars that you earn which are funnelled into the above boosters.

The real gem of Jewel Match King is the lack of a stamina or life system so players can attempt a level an unlimited number of times without having to beg friends or come back a few hours later. Players should be aware that this has a trade off though, being the ads that appear in between each level which can include videos.

This review was first published on October 19, 2014. Read our update policy to learn more.