Based on Norse mythology Jotun takes place in a hand drawn world and encourages players to explore the vast game world which hides give epic Jotuns that the player needs to defeat. Originally released for Windows, Mac and Linux in 2015 Jotun was subsequently released on a number of consoles in 2016 and 2018 for the Nintendo Switch. 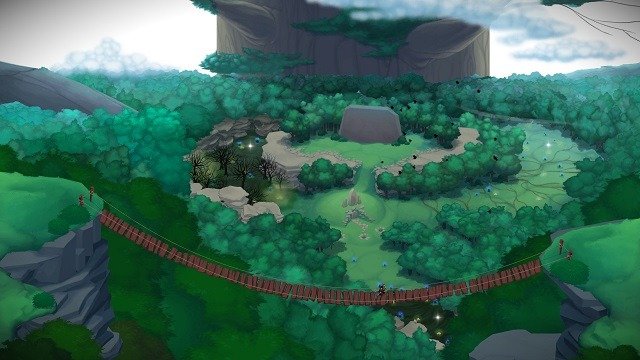 Your vessel for this adventure is Thora, a Viking warrior who met their end in an inglorious way but has been given a second chance to prove to the Gods that she is worthy of stepping into Valhalla. In order to do so you’ll have to unleash the five Jotuns by collecting runes and face off against them with your axe and associated fighting skills. These Jotuns (Jötunn) are based on Norse mythology and are powerful giant beings with elemental and chaotic powers that sees you match off against plant, lightning, ice, fire and stone before fighting Odin himself for the final battle.

During this combat you’ll notice that the visuals are a striking element of your Jotun journey given it uses a hand drawn art style. Featured throughout the Jotun story of both the life and death the game also includes Icelandic voice acting to bring players into the Norse world and immerse them in the theme. 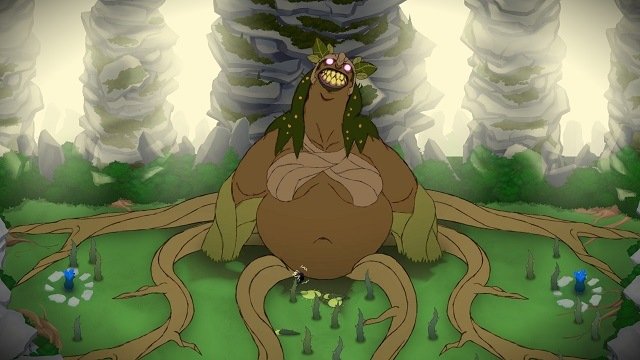 The battles against the give Jotuns is your primary objective and each features a familiar formula that requires players to explore their surroundings to discover the appropriate runes in unique biome of that Jotun. Once the runes have been located and activated the area of the Jotun fight unlocks for players to step into combat with the towering foes.

While each Jotun is designed in a unique manner in terms of design and mechanics the core combat of each is fundamentally the same as players swing their axe at the ankles of their enemy while dodging attacks and looking for a good opening to unleash. With the small total number of 5 Jotuns though and the unique visual designs drawing your focus it’s unlikely to get stale before you reach the game credits.

Outside of these actual fights with the Jotun there is minimal fighting with these gameplay elements leaning towards story, exploration and puzzles instead. With the impressive art style and unique interactions hiding throughout the various landscapes this lack of combat is by no means dull in Jotun and equally engaging as the fights with giants that you’ll have. Exploring also serves a secondary purpose as it teaches you the skills you need for the upcoming battle along with upgrading your health or passing on powers from the Gods which can help you overcome the giant battles ahead of you.

Games Finder is a Steam Curator and featured in the aggregate review scores data of MobyGames and Neoseeker.
FEATURED ON
Games Like Shadow of the Colossus
LEAVE A REPLY Cancel Reply