Krafteers: Battle For Survival (originally Krafteers: Tomb Defenders) attempts to blend several genres together into a single survival adventure. From collecting resources from the game world, to exploring the strange locations and crafting tools everything in Krafteers is designed with survival in mind. While the game starts out as a RPG like survival game (reminiscent of Minecraft) the end game is more akin to a real time strategy (RTS) title where gameplay is focused around your built fortress and defending it against consistent attacks of evil monsters. 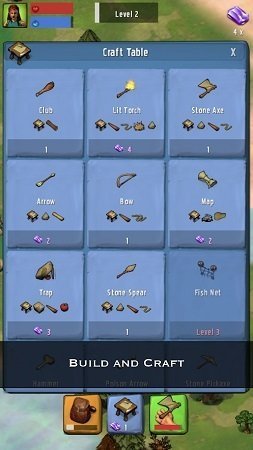 Krafteers: Battle For Survival was developed by Deonn Games and is available for free on your Android device through the Google Play Store where the game has achieved more than 1 million downloads. While free it is important to note though that an in game purchase is required to unlock all game items and remove the 2 player restriction on multiplayer. While there is still a healthy amount of potential for free players to enjoy what Krafteers: Battle For Survival is offering it ultimately will require a purchase for the full experience in the end game. Despite this the game holds a solid rating of over 4 stars from tens of thousands of Google Play store ratings.

Your adventure in Krafteers: Battle For Survival  starts out in the shoes of a survivor on a lonely island that you appear to have been shipwrecked on. With no sign of civilisation on the island players will have to scavenge the environment for resources from basic food and water to more advanced crafting items to develop tools and eventually weapons for defensive purposes. Within these survival mechanics Krafteers has a wealth of variety that allows players to focus on exploring, hoarding resources or strategy as they see fit during the early game. 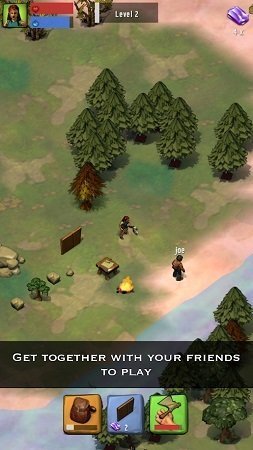 Adopting a mechanic from the best of the sandbox games genre Krafteers has random generation in its islands and your spawn location which encourages replay due to each experience being entirely different. As is standard in survival like games you’ll probably want to reset your progress after a few hours anyway once you have a basic grasp of the game mechanics to ensure a solid starting foundation and correct any mistakes while learning the ropes.

Ultimately your goal in Krafteers is to move past this early game resource gathering into the mid to late stages where building a fortress for defence is central to your experience as well as your survival from an unknown evil which constantly attacks the players. Given the resource and tool requirements to build said fortress though you’ll have to adjust your strategy to the resources available within each game instance which again adds to the replay factor. Not limiting itself to a solo adventure Krafteers allows players to tackle the adventure with a friend although this is subject to the 2 person limit in the free version as previously stated. 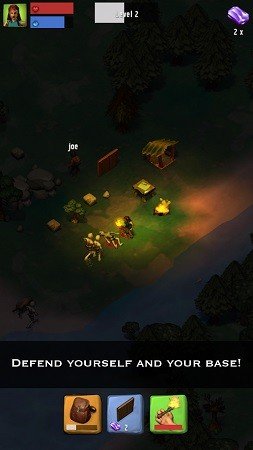 Krafteers: Battle For Survival also addresses one of the primary issues with the survival genre on mobile devices by providing a pleasant controls experience even for the smaller Android devices that are capable of running the game. In terms of design this means Krafteers opts for a very limited set of menus with an emphasis on tap based directives rather than a movement joystick and other buttons to perform actions.

With its strong gameplay variety from randomised level generation and the ability to bring a friend along for the journey Krafteers: Battle For Survival stands out in the mobile survival and crafting genre against a sea of games attempting to capitalise on the boom of mobile Minecraft inspired clones.

Games Finder is a Steam Curator and featured in the aggregate review scores data of MobyGames and Neoseeker.
FEATURED ON
Games Like Dont Starve, Games Like Minecraft
5 COMMENTS
LEAVE A REPLY Cancel Reply