The game of the Gods awaits you in Krosmaga, a game that combines board game with card collecting into one for Windows, Mac and mobile. Your objective in Krosmaga is to use your skill and strategy as a God to overcome your enemy by summoning mortals, creatures and powerful demi-gods. 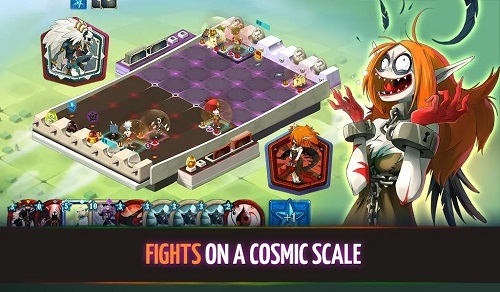 Playing as one of the 12 Gods of Krosmoz you’ll command your premade deck or design your own. With well over one hundred such cards designing your own deck is a constant effort, evolving as you unlock more cards. Many such cards are based on the Dofus and Wakfu universe, a MMO franchise that has vast lore to draw from. Thankfully Krosmaga includes account based support so you can take your progress across all your linked devices.

Not only does Krosmaga combine card collection and board games there is also an element of Tower Defense in a similar vein to that of Clash Royale titles where you’ll send your troops to match up against the opposing teams. Decks allow for 35 cards with up to 3 duplicates providing plenty of

Your battlefield for the fights to come is the Krosmaga board which is made up of five separate lanes with a Dofus at the end of each, the winner is the first to destroy two of the Dofus. Each turn you and your opponent will play a single card from their hand which can broadly be a unit or a spell card. 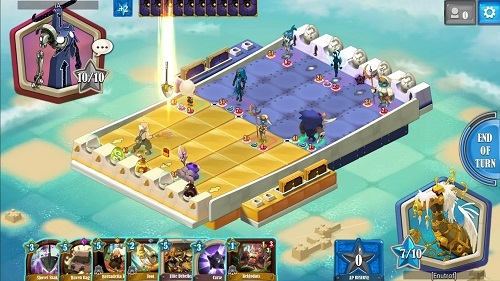 Once a unit has been summoned players have no control over it with its actions based solely on its card stats. While this includes typical attack and defence numbers which are used should they encounter an enemy a movement stat also controls how fast (or slow) it moves down the summoned lane.

With many strategies coming out from the different types of Gods there is plenty of variety in Krosmaga although a thin population makes it somewhat difficult to find a match up at your same level.

Games Finder is a Steam Curator and featured in the aggregate review scores data of MobyGames and Neoseeker.
FEATURED ON
Games Like Age of War, Games Like Clash Royale, Games Like Deck Heroes, Games Like Hearthstone
LEAVE A REPLY Cancel Reply