Mixing fighting games baseball bats and almost squash like rules is Lethal League, a game about hitting a ball at continually increasing speeds to knock out your opponent. 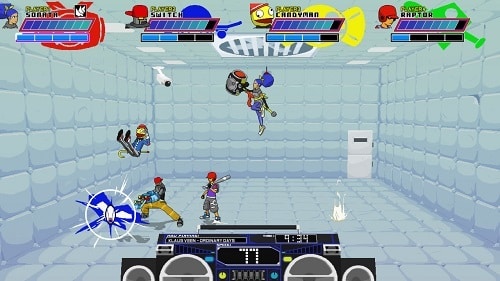 Allowing up to 4 players to face off in the various game arenas the simple design of the game can quickly become utter chaos. Your main goal of each match is to hit the baseball sized metal ball into your opponent to knock them out.

By hitting said ball it will change to your colour allowing it to deal damage to enemies (1 hit kill) while not hurting yourself. If an enemy can hit the ball though it will increase in speed and turn against you requiring you to dodge it until you can land a safe hit. Players need not wait for their enemy to hit the ball though and can continually hit the ball to boost its speed. The anti gravity nature of the ball means that it can fly horizontally with ease and will maintain its momentum in the direction it is hit. 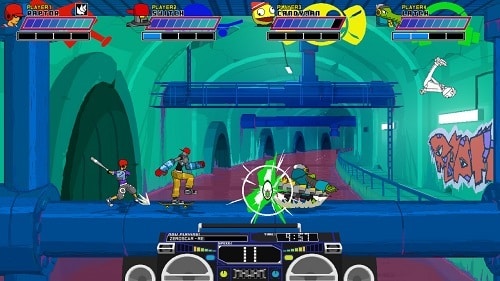 Lethal League offers a roster of characters that come with their own unique designs, mobility attributes and special abilities. From Raptor a human wielding a metal baseball bat with the ability to quickly hit the ball twice and perform wall jumps to the Candyman that has the ability to jump higher than other characters and make the ball phase through walls and appear on the other side of the field.

Maps are equally unique with 7 different arenas with their own tracks that gives you plenty of visual and audible variety. Game modes aren’t as varied though with choices limited to the standard versus mode, training, one player challenges to hone your skills and the strikers mode which plays similar to soccer.

Games Finder is a Steam Curator and featured in the aggregate review scores data of MobyGames and Neoseeker.
FEATURED ON
Games Like Rocket League, Games Like Super Smash Bros
LEAVE A REPLY Cancel Reply