Lollipop Chainsaw injects comedy into a zombie themed hack and slash adventure. It’s style isn’t for everyone but for those that approach it with an open mind you’ll found a very unique and wacky adventure. 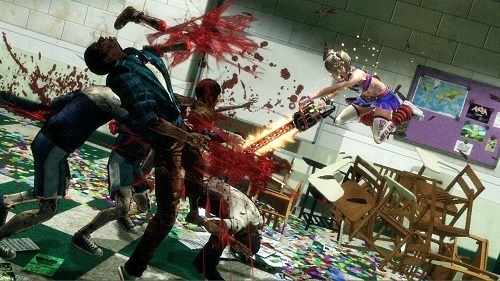 Your character for this over the top adventure is Juliet Starling, a popular cheerleader who also happens belong to a zombie hunting family. This comes in particularly handy on Juliet’s 18th birthday when she goes to visit her boyfriend Nick and gets stuck in the middle of a zombie outbreak.

Unfortunately she is unable to save her boyfriend Nick from being bitten but does manage to save his head through the help of a magical ritual. Nick spends the rest of your adventure literally tied around your waste and makes for lots of back and forth between the characters as they tackle the zombie outbreak together by defeating zombie bosses and saving classmates.

Core gameplay is predominately hack and slash with little innovation. You’ll dodge and swing your chainsaw to kill zombies or smash objects. Eventually you’ll get to extend your arsenal with a ranged Chainsaw Blaster and a special Chainsaw Dash skill that lets you charge around the game world and launch off ramps.

The gameplay in Lollipop Chainsaw starts off extremely simple and it does take a little longer than you might like to start getting all the goodies of the game. These goodies include new moves, combos and stat boosting items along costumes, music and artwork which provide a decent sense of item hunt in the game. 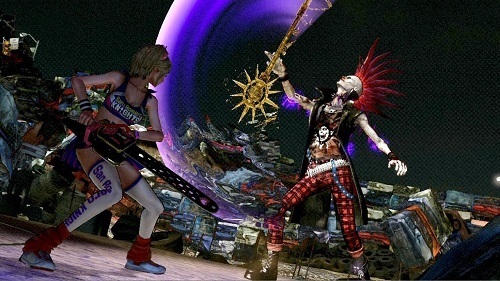 While the main gameplay is solid there isn’t much innovation here, Lollipop Chainsaw does an extremely good job of breaking this up though with all sorts of mini games and very unique boss encounters.

Lollipop Chainsaw isn’t for everyone but it is a pretty good option for hack and slash fans that want something different with a great soundtrack and impressive boss battles. The short game and lack of innovation in terms of mechanics make it a little less desirable though.