Machinarium offers a unique and addicting puzzle adventure game across a number of platforms. The game was originally released in 2009 for Windows and Mac with follow up releases for PlayStation 3, Android and iOS. 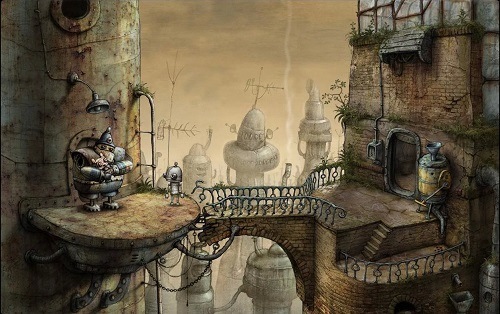 Machinarium uses a point and click style of adventure along with a unique art style and no game dialogue. This no dialogue policy extends to spoken and written language so Machinarium definitely packs a unique experience that you no doubt haven’t seen before.

The overall objective in Machinarium is to solve puzzles which players can access through the game’s overworld. The game also has some amazingly well hidden easter eggs that will have you scrambling to find them all as many of them reveal the back story of this game world.

While gameplay in Machinarium will be difficult for players not usually accustomed to puzzle adventure games the dual tier hint system is there to help players that need an extra helping hand to get through the game.

Once for every puzzle you can receive a handy hint to push you in the right direction although they get pretty vague as you approach the end of the game. If you need further help the game also has a built in walkthrough system which you can use at any time provided you can beat a mini game. 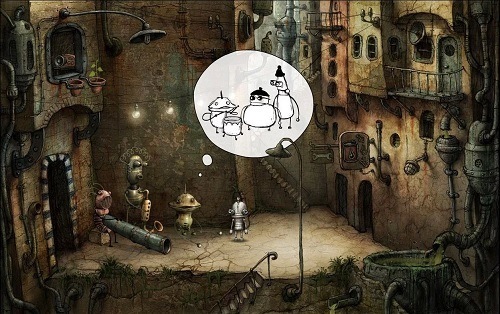 You’ll start off solving puzzles in Machinarium but quickly get engaged in the story and almost forget that you are playing a puzzle game. Players take on the role of a robot named Josef who discovers a villainous plot to destroy a tower in the city. This plot then expands with twists and turns that you won’t see coming which makes for a simple but enjoyable plot under the puzzle action of the game.

Machinarium is one of the few modern games to capture the old style point and click puzzle adventures but also manages to bring it into modern times with its quirky game aspects.