Taking the success of Game Dev Story Kairosoft has now imported this popular formula into a journalist setting with Magazine Mogul, a magazine studio management game. Like the other Kairosoft titles on the market you’ll lead the growth of your magazine, find the coverage, brainstorm new ideas, hire your fierce editorial team and expand your office space to accommodate the growing team. Those following the Kairosoft management game titles of which there are now dozens will find the mechanics familiar with many being imported from their other titles while being reskinned for a magazine publication. 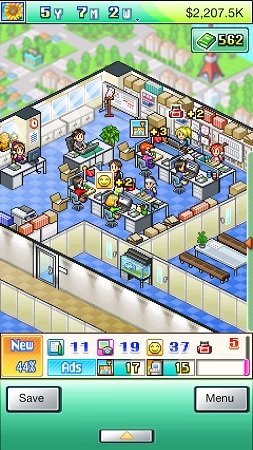 You’re primary gameplay loop in Magazine Mogul revolves around the production of a specific print magazine which you’ll research before publication to the world before investing your profits back into better high quality magazines. Fundamental to this process is your staff team and their input who each have their own attributes in writing, design, interest and typos that directly impact the end result in addition to some RNG magic in the background.

Accordingly the primary management element revolves around investing appropriately in the correct staff with your limited funds to squeeze out magazine growth as efficiently as possible. Ideally you’ll generate the aforementioned four stats from an optimal mix of employees to deliver an impressive and popular magazine issue. This is just the start of the management depth though with players also needing to consider the combination of theme, writing and photography, advertisements and your magazine fans for the most cost effective and beneficial magazine. 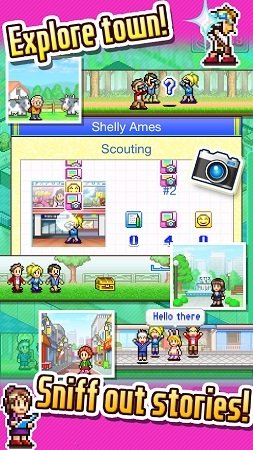 Unlike a traditional magazine with regular issues you’re magazines are only released once completed so there is no time pressure on hand. This is an important mechanic as it gives you the time to select the appropriate advertisers, the kind of column you’ll feature and where your main stories will be set. Less experienced employees will also accidentally introduce typos which can be corrected by spending one of your core resources, research points.

To bolster this core gameplay Magazine Mogul also offers a range of side activities to flesh out the management experience with the likes of scouting locations, attending the yearly magazine awards ceremony, searching for new themes and even helping out the town allowing for a higher quality magazine. 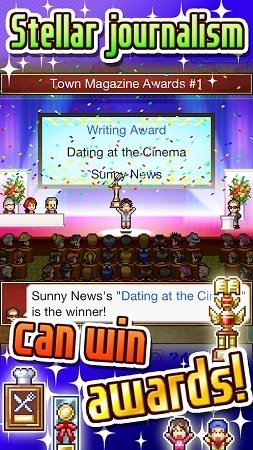 It’s one of their more varied games in the Kairosoft line up thanks to these additional elements that most of the other games in their portfolio simply don’t offer. The only let down is you never really feel like you can be as creative as you can in Game Dev Story or Anime Studio Story as magazines can be a little dull in comparison to these better represented hobbies.

Overall Magazine Mogul offers a decent challenge but nothing too complex that stays fairly close to the casual management game genre offered by other Kairosoft titles.

Games Finder is a Steam Curator and featured in the aggregate review scores data of MobyGames and Neoseeker.
FEATURED ON
Games Like Game Dev Tycoon
LEAVE A REPLY Cancel Reply