Taking the wildly successful Magic: The Gathering franchise and adapting it to the digital world Magic: The Gathering Arena is a game that has been long awaited by countless die hard fans of the franchise with the wait finally coming to a close in September of 2018 when the game entered its open beta phase after a year in a closed beta state.

Also known as MTG Arena or simply Arena the game follows the physical card game rules and design to the letter. To ensure complete newcomers aren’t left out in the cold though Arena includes a wealth of tutorial content to ensure even a novice can quickly come up to speed with a community heavily filled with long term enthusiasts of the physical card game who have years if not decades of experience with Magic. 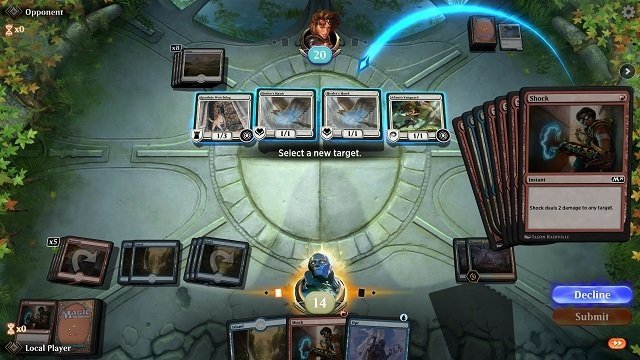 For those unfamiliar with the Magic: The Gathering formula the game centres heavily around the use of land which comes in various forms and in turn generates mana of five colour types in order to summon, utilise spells or apply other effects from cards within your deck. Ultimately by doing so you’ll be seeking to reduce the health of your Arena opponent down to zero (from 20) and claim victory for yourself.

In comparison to other modern card games this overall design and ruleset will allow anyone who has played a card based video game before to step into the world of Magic: The Gathering Arena without too much friction. This is of course unsurprising given that the franchise in general is the inspiration for basically every single card collection game in existence at the present day.

Supporting both a Constructed and Draft mode Arena has some variety built into the core gameplay loop and does encourage some experimentation. In Constructed you’ll have your whole library of cards to call on to create your ideal deck and be able to constantly tweak it one card at a time until you find the perfect balance for your preferred strategy. Arena does start new players off with a healthy dose of basic cards and even prebuilt decks although more strategic variety must be unlocked through matches and quests that earn booster packs. 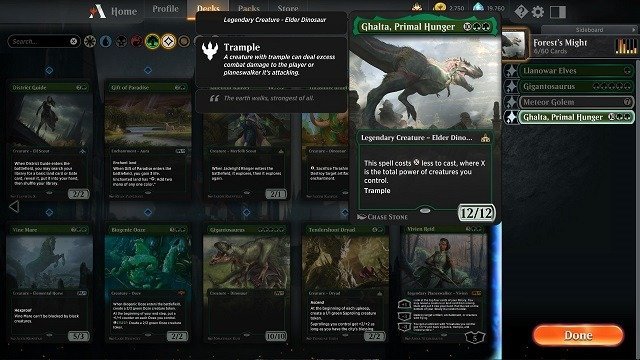 Draft mode on the other hand offers a little more challenge and requires players to adapt to using a random handful of card options and creating a viable deck from them. Your success or failure in this mode will then translate to a varying amount of premium currency, cards and other rewards that are invested back into your core card library. Ranked and unranked variants are available along with a few plans for additional modes depending on how the game develops over time.

On the topic of premium currency Arena employs a gem system which unlocks the ability to enter in game events for those that thrive on competition as well as gain access to more regular booster packs to build out your card library. To help counter unnecessary library bloat the 4 maximum card rule in any deck also applies to your library with additional cards automatically being turned into the Vault which will occasionally spit out wildcards that can be redeemed for any card of that given wildcards rarity.

Keen eyed Magic fans might remember that this is not the franchises first attempt at adapting the much loved paper based card game into a free to play digital environment with Magic: The Gathering Online released in 2002. While impressive for the time the age of the 2002 release and general clumsiness of the design has been showing for a while leaving it to be overshadowed by fancier and flashier collectable card games such as Blizzard’s Hearthstone. Magic: The Gathering Arena is thus a huge step forward for the series as it seeks to reclaim it’s title as the original and best of the card game genre with user friendly design in mind. 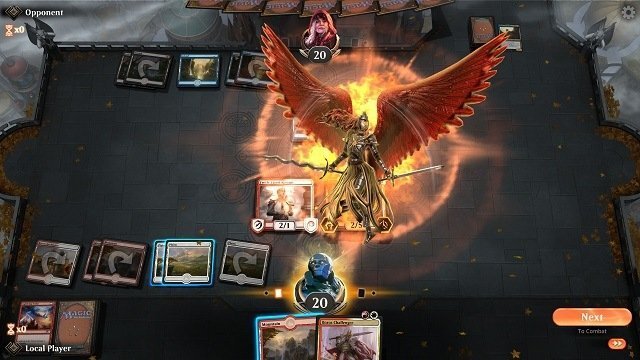 This design includes the most obvious aspects of fresh and enhanced visuals over its 2002 predecessor but also extends to things like the deck creation process with UI that makes it easy to sort, organise and filter cards in your library. This general theme also continues in the card battles themselves with a clear and consistent layout of the game board pairing with distinct stages of combat to help shape the flow of individual game turns.

While few experiences can come close to the euphoria of opening up a sealed physical card pack it’s hard not to admit that Magic: The Gathering Arena comes very close.

Games Finder is a Steam Curator and featured in the aggregate review scores data of MobyGames and Neoseeker.
FEATURED ON
Games Like Deck Heroes, Games Like Hearthstone, Games Like Yugioh
LEAVE A REPLY Cancel Reply