Changing up the basic soccer formula to be more intense is Mario Strikers Charged, a Wii title that builds on the original GameCube experience, Super Mario Strikers. 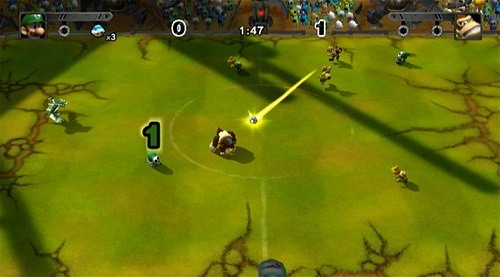 Offering similar gameplay to said GameCube title players will find themselves commanding various Nintendo characters onto the pitch as they fight for control over the metallic ball. Difference pitches offer more than just a change of scenery though with each introducing unique physical elements that can alter gameplay.

Central to your soccer team is your captain with behemoths of the Nintendo franchises available to led your team such as Mario, Luigi, Peach, Bowser, Wario and Donkey Kong to name a few. Pairing with these captains are 3 sidekicks to create your team of 4.

Building this team is central to how you play with each captain and sidekick having their own statistics in the four areas of movement (speed) shooting (shot power), passing (pass speed) and defence (how far they can tackle). On top of stats you’ll have to consider a characters special abilities and defensive power. Basic items are also available with the likes of red shells and bananas to take out enemies for easier goals. 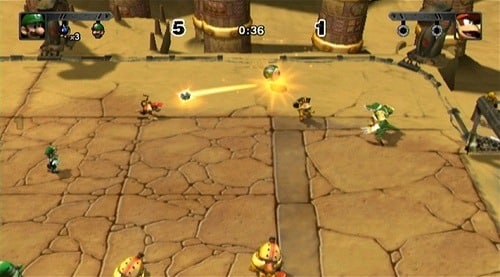 Game modes offered in Mario Strikers Charged ensures some variety with the likes of Domination skirmishes, Striker Challenges that alter various game conditions, the Road to the Striker Cup which sees you playing out a season of matches against the computer for rewards. Players also have the ability to go online to find a match against someone else in the world.

Mario Strikers Charged offers a strong mixture of strategy and traditional soccer that makes great use of the Nintendo franchises to add a unique flare.