Mini Metro opts to go down the simplistic gameplay route with a unique offering in the transport simulation video game genre that still proves challenging despite the basic design choices. Focusing on the creation of an efficient subway system in a rapidly growing location it’s a challenging title that allows players to begin to understand why real world metro systems struggle so much with expansion of cities and population. 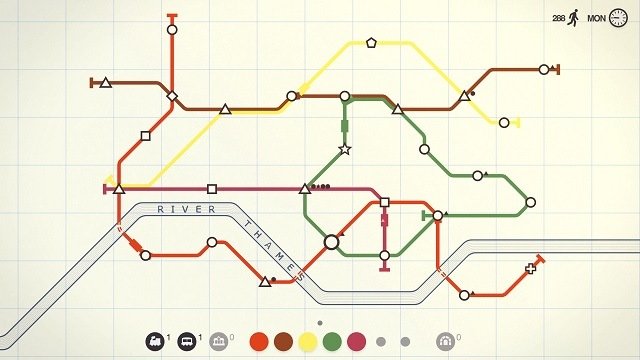 Gameplay in Mini Metro is basic but still ensures plenty of discovery as the game follows a play as you learn approach with slow introduction of mechanics. With the goal to design an efficient subway players involvement is centred around the creation of coloured lines which are representative of subway tracks.

These tracks are used to connect the various subway stations which are represented by various shapes within the game (squares, circles, triangles and more). At each of these subway stations smaller shapes will appear which represent people and the station they want to arrive at. For example at one of your circle stations a few triangle people will appear, jump on your train and then get off at the next triangle station you visit which gives you an easy visual sense of how people are travelling around your colourful subway system. 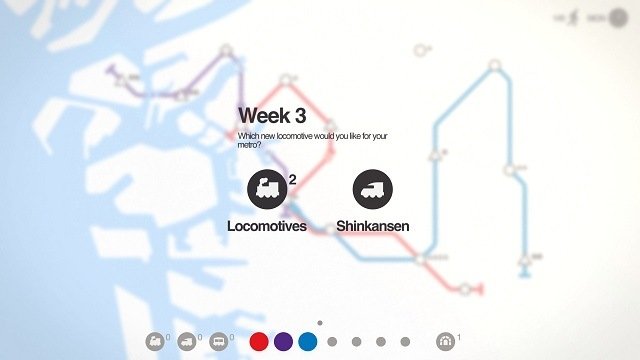 While this starts out as a simple thing to achieve the range of shapes that appear and the inflow of passengers can quickly overwhelm an inefficient design. This is also made more complex by the river that players will need to cross in some levels with tunnels which are a limited resource. Players can obtain additional tunnels at the end of each week although this choice is mutually exclusive to things like new lines, carriages and trains which requires forethought for success as you need to balance demand and your resources in the endless game mode. The mechanics in the normal and extreme modes are slightly different in terms of level ending with Mini Metro also offering a more relaxing sandbox mode to players.

Mini Metro repeats this formula across just shy of a dozen cities with their own layouts and growth patterns. These levels are inspired by real world cities such as New York City, Chicago, Berlin, Hong Kong, Paris, London, Melbourne and countless others across the globe with each starting with a three station base before expanding outward in line with the mechanics described above. 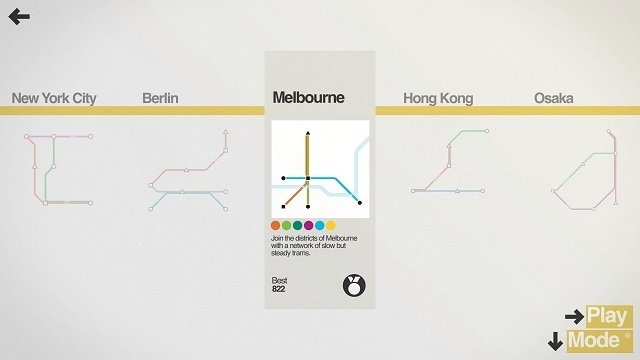 In addition to the healthy variety of levels the growth of cities is also randomised to ensure you can replay each location several times and that mastering a single strategy won’t mean you’ve mastered the entire Mini Metro experience. On the accessibility side Mini Metro also supports colour blind and night modes to ensure everyone can get their hands on this strategy subway title.

Games Finder is a Steam Curator and featured in the aggregate review scores data of MobyGames and Neoseeker.
FEATURED ON
Games Like Factorio, Games Like Transport Tycoon
LEAVE A REPLY Cancel Reply