Experience an action adventure on the edge with Mirror’s Edge a Windows, Xbox 360 and PlayStation 3 title that is filled with parkour elements and a dark dystopian society setting. Drawing inspiration from vast running and chase scenes from Hollywood films Mirror’s Edge follows Faith Connors a parkour expert courier who allows those to communicate that want to evade the government eyes. 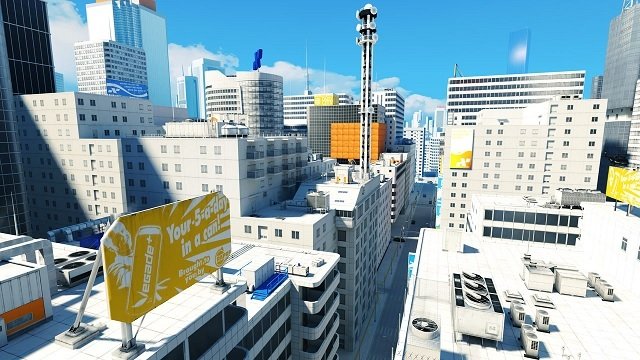 Your main character in Mirror’s Edge is Faith who is known as a “runner” to deliver messages without the government surveillance interfering. This means using the rooftops and networks of ventilation shafts to reach your objective in a game that is mostly about three dimensional platforming. All of this parkour takes place in a colourful world that makes it distinct from other games that are traditionally more darker in design and helps guide players to paths in the skyline.

While the world might be a colourful one the themes that Mirror’s Edge explores are most definitely not. You’ve got a dark city that on the surface seems like a utopian society, although once you dig a bit deeper is clearly a dystopia with a totalitarian regime dominating the populace by controlling all communication and media while banning many freedoms. Mirror’s Edge is set nearly two decades after a large scale protest that resulted in the deaths of many protesters and civilians while following the adventures of Faith in her struggle against the government as she becomes more entangled than she could have ever imagined. 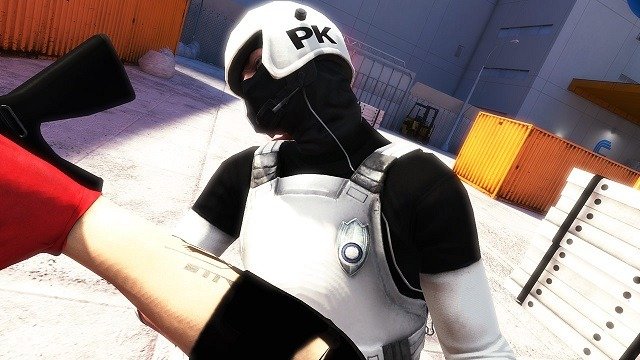 Centred around a rising political candidate known as Robert Pope that is challenging for the mayor position players and their twin sister Kate who operates as a police officer cross paths. With the loss of their mother during past protests both girls are in a troubled place and torn about their allegiances. This is quickly laid to rest though after Kate is allegedly framed for the murder of Robert Pope with Faith attempting to clear her name while supported by her mentor and former runner Mercury that feeds information to her.

Gameplay of Mirror’s Edge is essentially a parkour experience which in itself is a unique game adventure. When paired with the game design that emphasises a realistic camera movement that follows Faith’s actions closely. Alongside the high quality animations of the city and Faith’s limbs you’ll definitely have a sense of being a runner within the game. 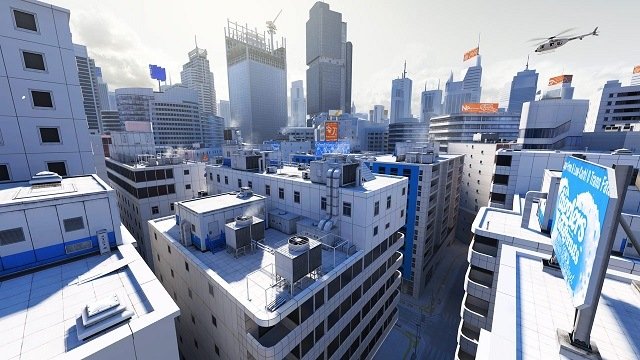 Momentum is key to Faith’s parkour talents with many gaps requiring sufficient momentum to clear and thus Mirror’s Edge is all about chaining your movements off the objects within the environment. The majority of parkour is contextual based with your upward movement button performing jumping, climbing or grabbing actions depending on the given scenario. Meanwhile the downward movement results in rolling, sliding or crouching which builds a fluent sense of parkour.

To assist players with determining the combination of moves they’ll need a Runner Vision system will highlight particular environment objects when Faith gets close, as the game goes on though this is reduced to just end level locations to build a sense of increasing difficulty. For further help players can use Reaction Time which gives a few seconds of time slow down to plan your next jump without sacrificing your built up momentum and regularly utilised in each campaign level is to find the best route from point A to B.

This review was first published on January 27, 2013. Read our update policy to learn more.

Games Finder is a Steam Curator and featured in the aggregate review scores data of MobyGames and Neoseeker.
FEATURED ON
Games Like Assassin's Creed, Games Like Dying Light, Games Like Portal
LEAVE A REPLY Cancel Reply