Monopoly Tycoon aims to combine the popular world known board game of Monopoly with the tycoon video game genre. Monopoly Tycoon represents a nice change of pace from all the other Monopoly based video games on the market which historically have focused solely on transforming the board game into a video game without changes. For the most part Monopoly Tycoon achieves its objectives in offering something new and alternative as far as Monopoly video games go although that doesn’t mean it will appeal to all tycoon fans indiscriminately. 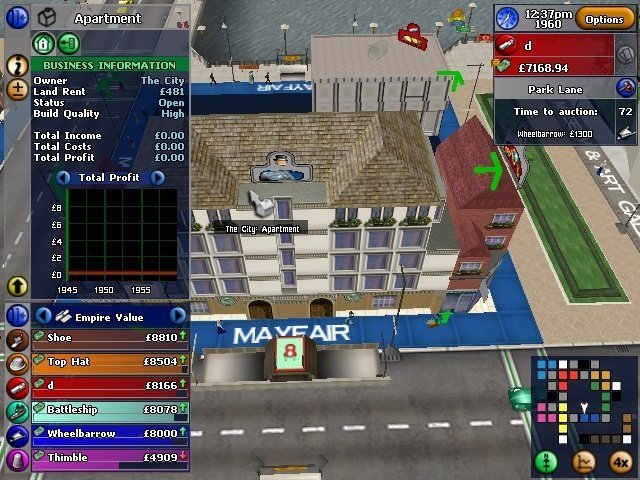 Released in 2001 for Windows by Deep Red Games Monopoly Tycoon is well over a decade old. Launching with sub par graphics back in 2001 the game has not aged well while there is also compatibility issues to consider depending on your system (so consider doing some quick research before purchasing).

Graphics aside the gameplay of Monopoly Tycoon adopts a unique approach to the Monopoly formula with a focus on having players battling it out to earn the most money within a set time period. While this has roots in the original Monopoly board game which is all about money and property accumulation the video game adds an all important time limit to keep games faster paced and create a pre determined end point. This contest can be either done against the AI which comes with a range of difficulties or with a friend going head to head. 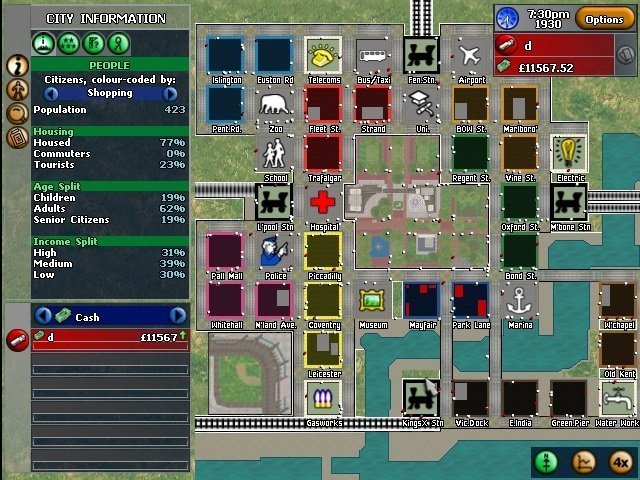 Each game in Monopoly Tycoon starts in the 1930s and eventually takes players all the way past the year 2000 in a battle for property and businesses. The game is split into a total of 16 different levels with a bonus sandbox level for additional content. These levels give the game structure and create goals for the player to work towards within each sub level. Objectives for levels include being the wealthiest player, having a certain amount of income, making a certain number of sales or eliminating all opponents.

In Monopoly Tycoon players buy stores, utilities, railroads and apartments in a Monopoly inspired game world and become the landlords of these property blocks. Players then earn regular revenue from these locations much like how the board game of Monopoly operates. When players own all the property of the same colour they can build hotels on these locations to increase revenue dramatically. 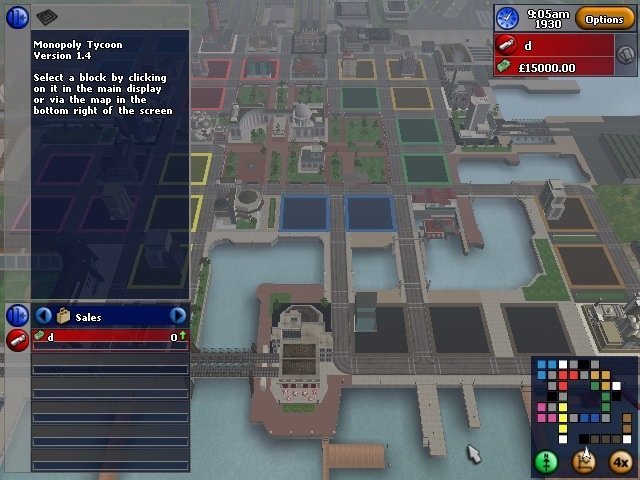 Players will complete certain actions everyday and make decisions that will either improve or hurt their profitability. These decisions are made at different times throughout the day due to the design of Monopoly Tycoon having both day and night businesses. The majority of actions though occur at the end of the day. And tie into the mystery card system which is inspired by the Chance and Community Chest Monopoly board game. These mystery cards have a wide range of possibilities that can either help or hurt the player which makes the game more about adapting to situations rather than following a single strategy.

Ultimately Monopoly Tycoon captures the essence of the original board game but incorporates some fun tycoon inspired features to push the experience more towards a fast paced strategy game and offers a nice time capped alternative to the traditional Monopoly for solo and player versus player gameplay.