Monster Rancher DS like many of the games in the Rancher franchise was originally released in Japan in 2008 and made its way to international shores in 2010 allowing the wider gaming market to experience this next adventure in the series. With familiar mechanics cantered around monster capture, creation and training the experience was crafted for the Nintendo DS by developer Tecmo. 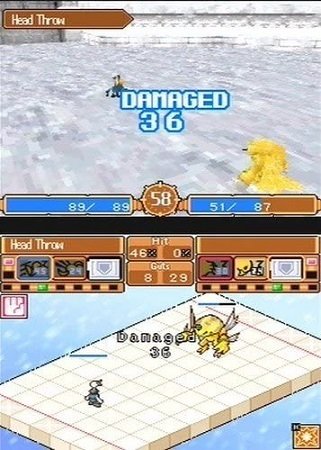 Monster Rancher DS joins a long running series of video games that started back in 1997 on the PlayStation and continued to evolve alongside hardware growth in the market. While the game has many of the old favourite monsters from these original few games Monster Rancher DS provides a good balance of new monsters to discover which results in a total of over 250 monsters to ultimately choose from.

The core gameplay of Monster Rancher DS is similarly mostly unchanged and rather enhanced involving the fighting, raising and breeding of various monsters in your quest to discover them all. The game has a number of  unique features and mechanics which set it apart from others in the genre and has enabled the franchise to carve a niche for itself in the market while attracting a sizeable fan base. While players lack their own avatar in the game they’ll make key decisions and request actions from their apprentice Cleo who is pivotal in your ranch management activities. 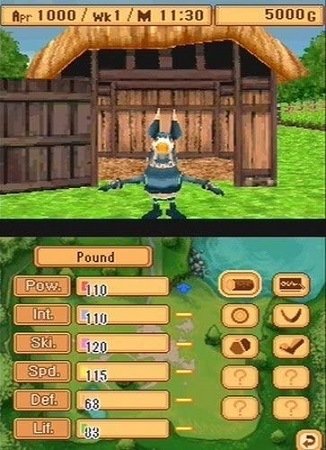 In order to add new monsters to your ranch collection players will need to use the Magic Field which utilises the touchscreen and microphone functions of the Nintendo DS with players drawing and reciting to summon them. Alternatively once the player has a sufficient stockpile in their ranch they can begin engaging in the breeding mechanic which allows combinations of creatures to be created. Failed attempts reward player with glitch monsters reflecting that there is no record of such a monster in the world database. Each of your successful attempts can be linked back to one of the two dozen odd breeds with some having familiar fantasy or real world inspiration such as Centaur, Dragon, Phoenix, Golem, Tiger and Plant.

After this point players will find that training is just as important as creation in Monster Rancher DS with much of your time spent time devising effective training methods to ensure your monsters are as strong as possible for the eventual fighting which drives game progression. This is the case because it is the primary money making method as well as bestowing new ranks on the player for their efforts in the tournaments. 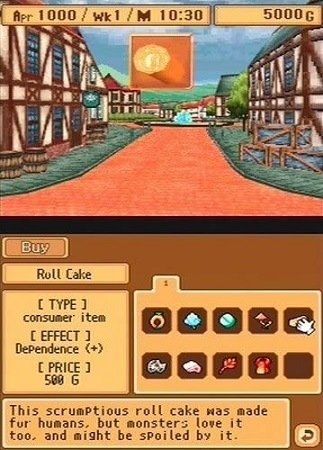 In terms of battle mechanics you’ll feel a familiar sense to other games in the genre with your monsters moves limited by a gut energy resource that is spent on activating an attack from their move pool. Monster Rancher DS also adds an additional layer of strategy depth with a range mechanic that has you balancing how far forward or backwards the position of your monster is relative to the enemy with each having pros and cons to consider. The game also includes an auto-battle mechanic that lets the monster control itself (as it would in the wild) which can be useful for fights where you have a clear advantage albeit or not effective enough to be consistently reliable for close tournament battles.

With its wide range of mechanics, strategy and fantastic monster design Monster Rancher DS has plenty of enjoyable aspects for newcomers to this much loved series while also appealing to the die hard players of games past.

This review was first published on June 17, 2014. Read our update policy to learn more.