Mount & Blade: Warband is the second game in the series of action role playing games that blend strategic elements into the core adventure as you trek across a medieval land claiming land for your own faction. Improving upon the original with the likes of improved visuals, multiplayer and additional factions that enhance your range of strategic choices and challenges. Originally for Windows in 2010 the game was further expanded with modern day console ports and some downloadable content to expand both the single player and multiplayer content. 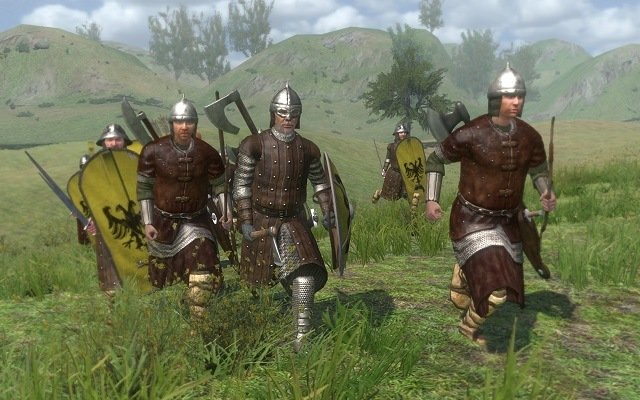 Mount & Blade: Warband takes place in the familiar medieval setting so players can expect the weapons and combat to reflect the weapons of the day with bows, swords and shields making up the majority of combat encounters. Army sizes and compositions also reflect the strategies of the day with hundreds to thousands of fighters with their own role on the battlefield. Whether you select single player or multiplayer modes players will find similar gameplay that revolves around conquering the map of Calradia although some multiplayer modes take away this expansion focus entirely for raw combat.

Entering into this land of Calradia players are given great choice over their starting position which impacts upon the ultimate strategy that you’ll pursue. This can also serve as the games difficulty mechanic with some choices giving you an easier or harder starting position to build from. Options include gender which has a minor attribute impact, your fathers career, your early life, adulthood and reason for adventuring and whether or not you can quit the current game without saving to potentially replay missions that are failing. Players can then spend a small number of remaining attribute, skill and weapon proficiency points with your starting point influenced by the choices you’ve made so far. 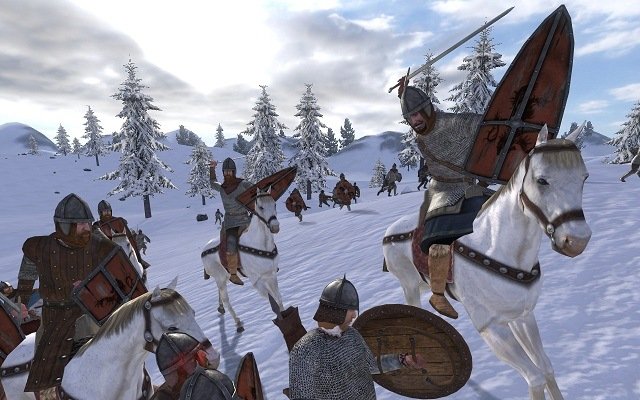 Further visual customisation is available through selection of your banner and the facial features of your main character and leader of your faction. These initial choices also enhance the overall role playing elements of Mount & Blade: Warband allowing players to potentially play as the son or daughter of a thief, merchant, hunter or noble on quests of revenge and money amongst countless other combinations. The most important and final choice at this point is your starting kingdom which determines your starting position.

With your world of Calradia loaded players step into a fixed map that contains a diverse range of biomes and city locations that players can visit as their lone adventurer. Players will not be a lone traveller for long though with building an initial army often your first objective which will allow you unlock the wealth of tactical strategy that Mount & Blade: Warband was designed around. This journey at the core has players moving from town to town recruiting units, engaging in randomised battles of wandering parties of different strength levels and improving their strength through wealth and equipment. The stand out unique element of Mount & Blade: Warband is that while the overworld has a slower pace to it for you to consider your next move the battles themselves are real time close quarters engagements. With each battle you’ll literally step into the shoes of your hero as you and your army party march along the terrain to the enemy party. Raiding from foot and horseback you’ll be in the middle of a medieval battle that lets you fire volleys of arrows or slash at your enemies for victory and is combined with AI commands to control the overall tactics and flow. With victory comes equipment and experience which will give you a stronger position for the next battle.

In between you’ll takes on quests from various locations, play the political town, siege castles and other actions that assist you with the ultimate goal of conquering the entire map of Calradia.

This review was first published on August 26, 2014. Read our update policy to learn more.

Games Finder is a Steam Curator and featured in the aggregate review scores data of MobyGames and Neoseeker.
FEATURED ON
Games Like Chivalry: Medieval Warfare, Games Like Dynasty Warriors, Games Like For Honor, Games Like Total War
LEAVE A REPLY Cancel Reply