Experience constantly changing game modes in Move or Die a game designed for the party game niche with a range of multiplayer methods supported. Offering a fast paced game for friendly and sometimes not so friendly competition all of the modes in Move or Die revolve around players not stopping for an extended period of time which quickly creates chaotic fun around 20 second matches.

Supporting online, LAN, couch and Steam remote play options Move or Die is one of the best titles in the genre in terms of multiplayer support while also offering AI options for players to practice in an offline single player mode which many multiplayer games overlook. With online play in particular players will be rewarded with unlocking of additional game modes and and character visuals that can help you brag to others in your lobby. 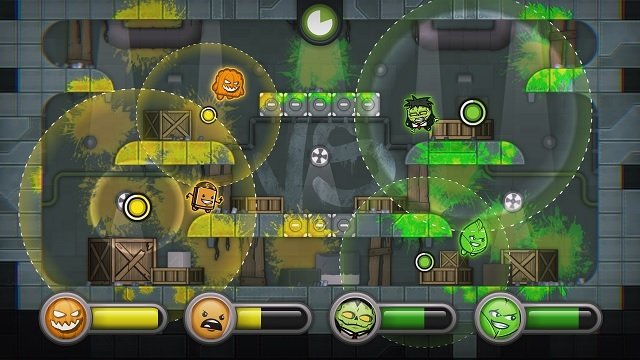 Move or Die opts for the approach that many other successful party games go for which is a simple fundamental game design and constantly changing situations to keep players engaged and generate laughs from participants. Move or Die achieves this by giving players control of their custom blob like creature with their abilities limited to moving and jumping through the multi-level game maps and associated game modes.

To add another element to the equation your health bar of your little blob creature will quickly drain if you stand still for too long although starts regenerating when you run around the map again. Mechanically the game is played from a 2D perspective with platforming being central to all the mini games, calling on quick reactions but also countering the moves that your friends make. When this platforming combines with the quick pace of matches and the need to keep moving chaos quickly ensues. 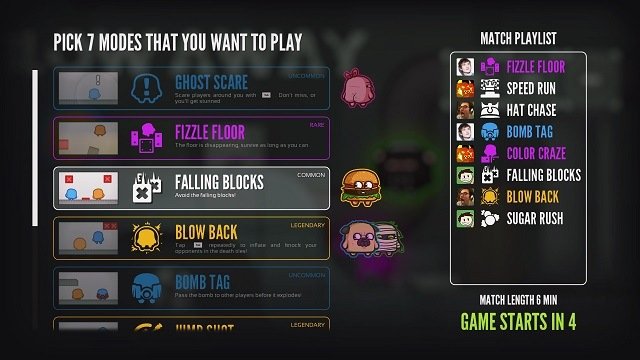 Consistent features across mini game map terrain include red X boxes which spell instant death, blocks that once activated will disappear for a small time and blocks that are invisible until touched by a player. The game modes of Move or Die all make great use of these features with the pool of available games agreed on by players before starting so you know what to expect and can remove your least favourite with ease.

Game modes include Block Back which has players bouncing each other into the aforementioned instant kill red boxes to win, Hat Chase where players fight to wear a hat for the longest period of time possible, Colour Craze which has you painting the map with your colour while outcompeting your friends, Speed Run which is a traditional race type mode and countless others that are continuously being expanded. As noted each of these game modes is designed to be played for around 20 seconds so it is short and sharp bursts before moving onto the next mode. 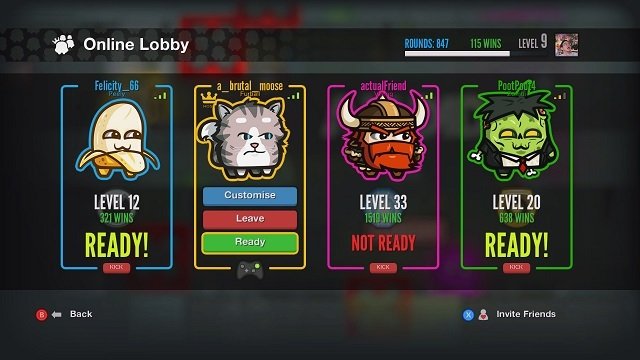 Eventually players can unlock over 30 game modes that similar to the customised characters are split into common, uncommon, rare and legendary rarity. Further customisation in Move or Die also comes from mutators that change the core game modes and special unlockable items that let you emote, splatter the backdrop, launch confetti or run around with your head on fire and are visual only.

The design of Move or Die is perfect for your next party couch game but with the solid online functionality and offline practice modes you’ll still never be without a game. When it combines with the likes of the level editor and daily challenges the potential of Move or Die is practically endless.

Games Finder is a Steam Curator and featured in the aggregate review scores data of MobyGames and Neoseeker.
FEATURED ON
Games Like Overcooked, Games Like Super Smash Bros
LEAVE A REPLY Cancel Reply