In Nanosaur 2 (or Nanosaur: Hatchling) players get to fly around the game world as a pterodactyl on a mission to recover the stolen eggs from the different level landscapes. The game serves as the sequel to the similar 1998 dinosaur game and while Nanosaur 2 was originally slated for Windows and Mac it was eventually ported over to iOS and Android devices with additional functionality. Note that the Android version was retired soon after release and currently no longer available through official channels. 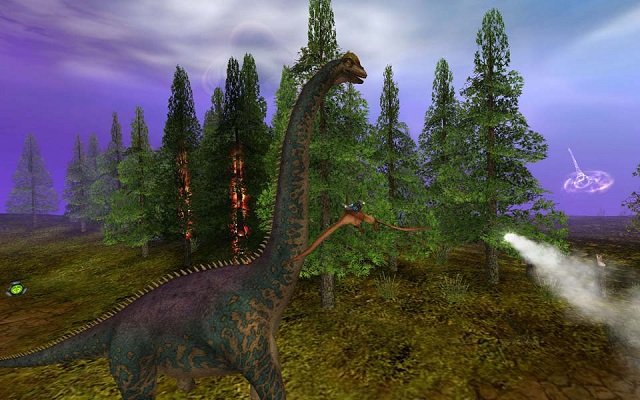 Nanosaur 2 continues the story from the original game with the eggs now once again under the control of the Nanosaur race who hold them safely away from threats. Unfortunately though a small group of rogue Nanosaurs have branched away deciding they want the eggs and the power they hold for themselves for ultimately a broader plot to obtain a large powerful force capable of claiming Earth. Thankfully for the player though a single egg was missed which triggers the events of Nanosaur 2.

With this single egg left behind the players avatar spawns on a mission to reclaim the lost eggs from this rebel group and in turn save Earth from the broad dinosaur threat that the Nanosaurs pose. While the story setup can be a bit confusing if you haven’t experienced the past entry in the franchise (released back in 1998) this is only a small piece of the overall game experience and is unlikely to impact you in a materially negative way. 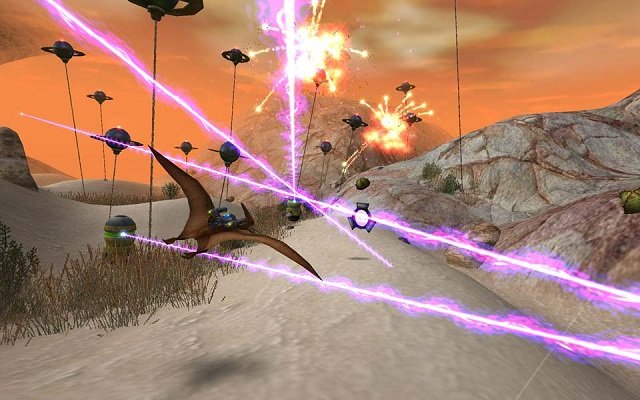 Nanosaur 2 gameplay revolves around players controlling their own Pterodactyl and using a number of different weapons which they acquire throughout the game as you advance and discover them across the varied rocky and lush landscapes. While players start with a powerful but basic shriek attack it eventually evolves and is upgraded into advanced lasers, force fields and much more so don’t be fooled by the dinosaur themed aesthetic into thinking you won’t have some destructive powers to win our battles.

The size of the game world in Nanosaur 2 is also vastly larger than the original Nanosaur title with three levels across different environments including a forest, desert and swamp level to ensure sufficient variety. Each of these environments presents its own terrain and enemy challenges along with an accompanying musical track to differentiate them between each other. Starting on the forest planet you’ll find a mostly basic planetary design without significant enemy threat or structures that also serves as a lite tutorial level. From here Nanosaur 2 increases the challenge with the desert level through environmental weather hazards like lava and tornadoes to contend with as they try to knock you out of the sky. Lastly, the swamp level shifts gears to challenge players with new enemies that can jump high into the sky along with new hazards to attack you from afar. 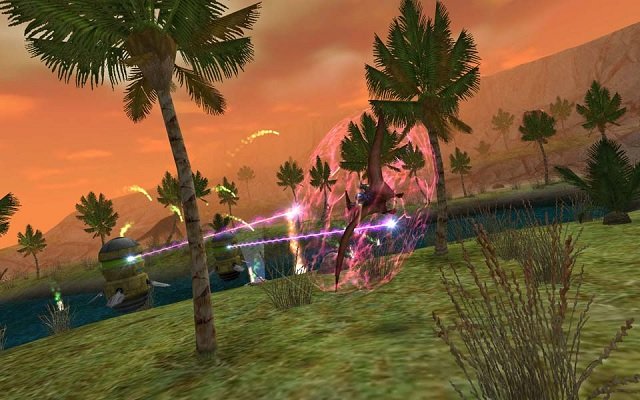 On top of the single player experience players can also take to the skies in multiplayer game modes including battle, race and capture the flag that take the concepts of the core campaign mechanics and add a friend into the mix for additional gameplay and replay potential.

While a simple concept if you love games that let you take control of an animal rather than a human then the Nanosaur series is one such option and one of the few that let you command your own dinosaur inspired creature. Despite the age of this franchise the game stacks up across both the computer and phone released versions.

This review was first published on May 20, 2013. Read our update policy to learn more.

Games Finder is a Steam Curator and featured in the aggregate review scores data of MobyGames and Neoseeker.
FEATURED ON
Games Like FeralHeart, Games Like WolfQuest
LEAVE A REPLY Cancel Reply