Naruto Online is a free MMORPG based on the Naruto universe both in terms of setting, design and story. As a turn based experience the game focuses your attention towards equipment and ninja team setup while including a number of flashy special attack moves to devastate your enemy. 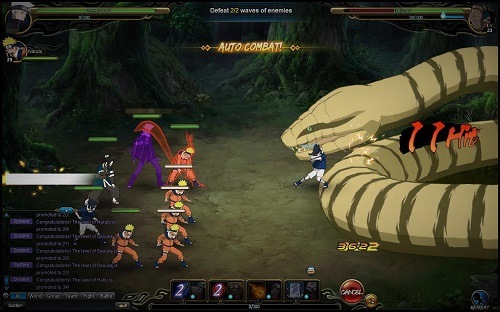 Upon logging in for the first time players will choose from 1 of the 5 premade characters which each fall into one of the five game elements of Earth, Wind, Fire, Water and Lightning. Each also come with their own fighting style, visual appearance and weakness to another element in a typical rock-paper-scissors formula. Once selected and named you’ll set foot into the world and the path of the ninja.

Movement is handled through the mouse while auto path finding is also available to get you to quest locations which are highly story focused and mostly line up with the anime series. Battles take place on a separate battle screen and are initiated at certain story points or when running into enemies while out in the wild. 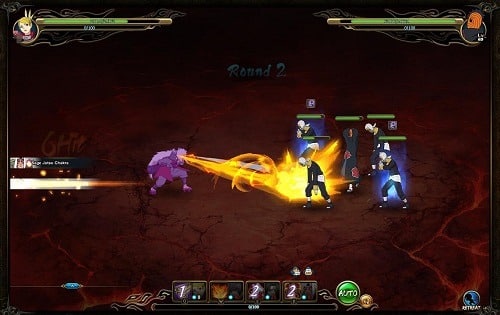 Said battles are fought between your character, their team of ninjas (up to 8) and the opposing team which can similarly vary in size. While the combat will automatically play out with basic attacks in a turn based manner players can activate skills based on their class and chosen ninjas that can shift the tide of a battle because of their offensive or defensive power.

All of these recruit-able ninjas come from the story which adds a great connection to the characters as you build your team. Each ninja has their own rank and element affinity which adds a layer of consideration to your team.

This review was first published on September 4, 2014. Read our update policy to learn more.

Games Finder is a Steam Curator and featured in the aggregate review scores data of MobyGames and Neoseeker.
FEATURED ON
Games Like Adventure Quest, Games Like Crystal Saga, Games Like League of Angels, Games Like Wartune
LEAVE A REPLY Cancel Reply