Awakening from cryogenic status and finding yourself alone in a post-apocalyptic world is a scary situation for anyone. NEO Scavenger attempts to capture this fear and disorientation in a turn based survival title with permanent death. 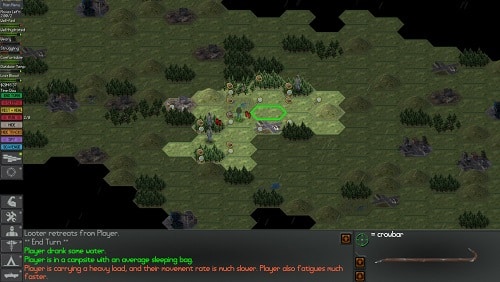 To start your NEO Scavenger adventure players will get the opportunity to develop a unique character from various skills and flaws. By taking on such flaws players can accept more abilities in the hopes that they’ll balance each other out. While this selection is important players will find that they are the mercy of randomness more than anything.

Right after deciding on this setup you’ll awaken in a chamber and climb out into the wilderness. Your adventure is primarily told through text which details your current environment and creates the atmosphere of survival game.

Actual gameplay is handled via the overworld map which is split into various game squares. Each square has its own randomised events with players able to move their character between locations by using one of their available turns. These turns are also consumed for other tasks such a crafting, scavenging and camping.

While the game does have a story following your character origins your more immediate requirements are where much of your focus usually lies. This includes the likes of hunger, thirst, temperature and pain which all have to be given careful attention, all of which can lead to death if not managed.

The most typical way to manage these needs is through the inventory system which revolves around scavenging houses, forests and various other environments. Doing so is a risk to your person with each location having its own values for loot, safety and stealth which determine how much loot you can obtain, the safety of the area and how much noise you’ll create by investigating further. 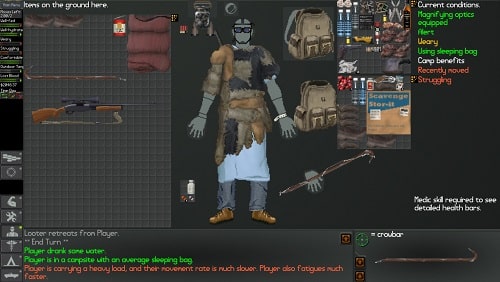 Many items are found in basic forms and need to be combined with other items you find in order to become useful items such as clothing, weapons or lockpicks.

NEO Scavenger captures the harsh nature of survival alone and also promises a real challenge, mostly due to the merciless nature of the randomised mechanics.

Games Finder is a Steam Curator and featured in the aggregate review scores data of MobyGames and Neoseeker.
FEATURED ON
Games Like Dont Starve, Games Like FTL: Faster Than Light, Games Like This War of Mine
LEAVE A REPLY Cancel Reply