Ninjatown is one of the few tower defence games available on the Nintendo DS and was released in late 2008 and intended for a younger demographic. Despite the small competition in the market Ninjatown offers a refined although somewhat generic tower defence experience with a unique presentation that make it viable for both young and old seeking some casual strategy based gameplay on their DS device or wanting a multiplayer variant of the genre. 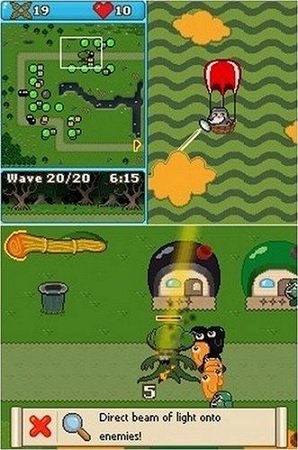 Set in the once peaceful town of Ninjatown which is populated by ninjas of all shapes, sizes and power levels the story begins after a powerful volcanic explosion opens up a hole in the world Ninjatown. With this volcanic eruption and a path into Ninjatown waves of demons led by the appropriately named Mr. Demon spew forward into the town to claim it for the demonic powers.

Gameplay is a standard tower defence affair at the core with players preventing the minions of Mr. Demon from passing from one side of the screen to the other by using various ninjas at their disposal. As Is standard for the genre these demons will travel on a predetermined path which allows players to create defences around these areas to fight back the demon advance. Said advance features a mixture of enemy types with their own attributes from splitting upon death, being able to infect your ninjas or advancing at great speed. 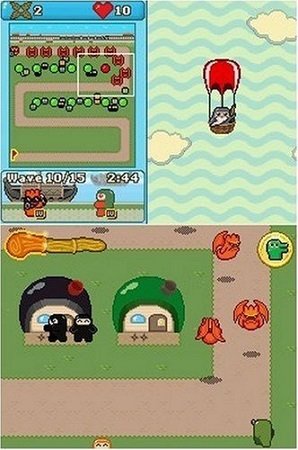 Each level allows a certain threshold of enemies to advance across the screen before a player loses the level and must restart with an easy option fallback that is enacted after several losses in a row. Players are graded for their efforts with higher tier grades unlocking temporary powerful ninjas to utilise at your will.

Your weapons to fight back in this case are the buildings that you construct which will spawn ninjas to engage their new demonic foe. Buildings require star cookies which are dropped from enemies or can be used from the players starting budget for each level and are also the require currency for upgrading power of towers to more advanced levels and variations. 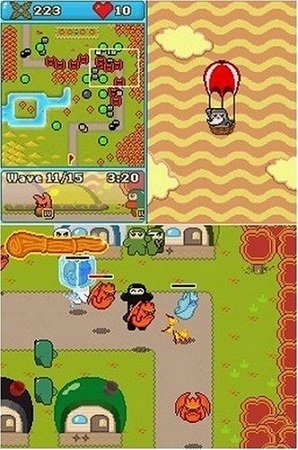 Of course there are a number of different buildings available to spawn ninjas of varying types with 8 in total that all have their place in a balanced strategy of defence. Uniquely in Ninjatown this goes a step further by also allowing players to build 1 of 6 modifiers near these buildings that enhance them in various ways such as providing speed or attack boosts and adds an extra touch of strategy to the tower defence equation. The final trick up your sleeve in Ninjatown is the Master Ninja himself who slowly remembers some powerful Ninja moves to give you the extra power you need for the later and more difficult levels and leverage the Nintendo DS hardware with players having to blow into the mic to push enemies back through a wind move.