No More Room in Hell is a free to play co-operative horror shooter that pairs you with a team of other players to achieve objects or battle against waves of zombies instead. It’s all about surviving the zombie filled scenarios with your limited resources which move locations with each game. 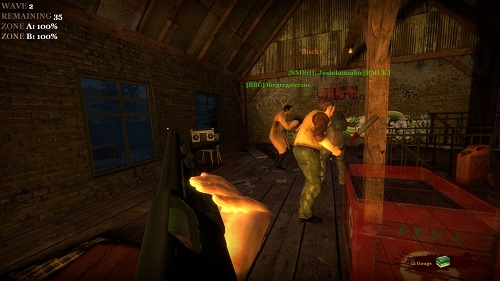 Your chance of survival in No More Room in Hell is slim with careful team communication and scavenging improving your chances. With the game set well into the zombie apocalypse you’ll have to walk past the millions of infected to achieve your objective.

Every element of No More Room in Hell aims to make the game as realistic as possible. This includes things like little ammunition, communication that only works within a limited range, no crosshairs or HUD and most notably a realistic infection. This infection mechanic is definitely the most interesting element with bites from zombies potentially leading to infection and eventually death. Once dead from infection though players will rise as a deadly runner capable of taking out their previous allies.

Runners are one of the most deadly enemies and in addition to being spawned from dead players can spawn randomly around the game world. The other main enemy in the game (known as Shamblers) are significantly slower and easier to deal with and can often simply be avoided by the player to conserve resources. Shamblers are also easily dealt with through the various melee weapons which when combined with the firearms in the game total over 30 options.

Gameplay is split between two game modes, one of which is wave defence (survival) while the other is more objective orientated (objective). In survival mode players will defend a National Guard safe zone with predefined areas having to be defended from increasingly potent waves of zombies. Every few waves players will also get supply crates to refill supplies and in general this mode has higher portions of supplies than objective although careful usage must still be applied, any dead teammates or new players will also spawn in this time. 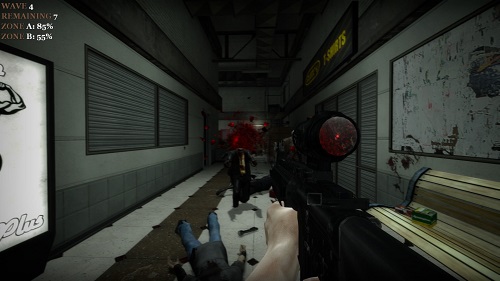 The alternative objective mode takes your band of survivors through a series of tasks in order to complete the current map and escape to survival. While maps are often replayed the objectives, item locations and enemies are randomised for a unique game each time. Most of these objectives are simple in nature and require the player to find items or activating a certain object.

No More Room in Hell feels a little rough when you first play it but quickly grows on you overtime, especially once the free price tag sinks in.

This review was first published on August 27, 2014. Read our update policy to learn more.

Games Finder is a Steam Curator and featured in the aggregate review scores data of MobyGames and Neoseeker.
FEATURED ON
Games Like Dead Island, Games Like Dying Light, Games Like Killing Floor, Games Like Left 4 Dead, Games Like Unturned
LEAVE A REPLY Cancel Reply

No More Room in Hell