Oceanhorn: Monster of Uncharted Seas is a beautifully designed Zelda like adventure originally for iOS devices and later ported to all major consoles and Windows. Featuring a large amount of exploration, various weapons, deep dungeons and plenty of secrets it takes inspiration from similar games released before it while adding its own unique elements. 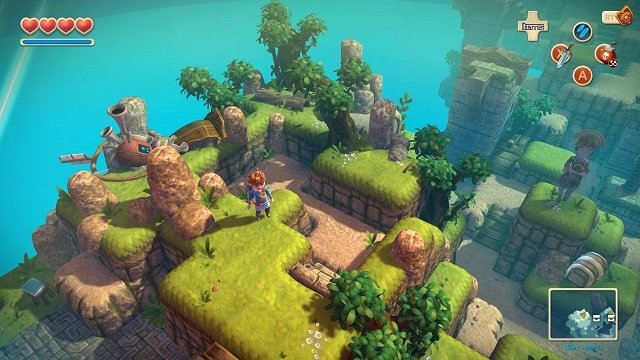 In this adventure players play as a fairly young boy who is left to fend for himself after his father leaves him in an attempt to defeat the sea monster known only as Oceanhorn. Leaving a note and your mother’s necklace players will use them to solve the mystery of Oceanhorn which leads to an epic adventure that spans over a dozen hours. Over this time you’ll grow to become your own accomplished adventurer with all the tools necessary to carve your own story of battling against Oceanhorn.

This story starts on a fairly secluded starter island where many of the games mechanics are introduced to players as they get to grip with the rules of the game world and the basic controls. This island is littered with signs in traditional RPG style which summarises all the basic information of mechanics that you will need for the adventure ahead. Beyond this starter island players will get to sail across the seas to a handful of unique locations which are unlocked through questing and conversation trees with NPCs and each hold their own secrets to grow your character power. 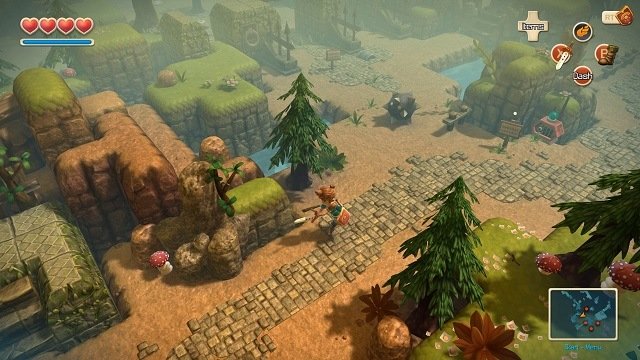 Mechanically the game borrows much from the Zelda franchise from the sword and shield weapon of the main character, to the ability to smash vases and move heavy objects to solve environmental puzzles. As the game progresses enemy types and your own arsenal expands to keep your combat encounters varied. From ground enemies like the hunter, bandit and spiderbot to the ghost or goliath fish in the seas each has their own distinct visual designs and attack patterns to overcome. Standing between players and the death of their character is a classic health mechanic with hearts on the UI representing your current life pool with upgrades to your maximum life available during your quest and often linked to optional exploration paths.

Meanwhile your weapon choices grow from the basic sword and shield to includes bombs, bow and arrow and an upgraded blade and shield. Spells also play a minor role in Oceanhorn: Monster of Uncharted Seas with a fireball, healing spell, black hole, ice and force throw spell used across both combat and puzzle challenges. These consume a secondary magic bar resource on use with potions scattered around the various islands the primary method of recovering this magical force. 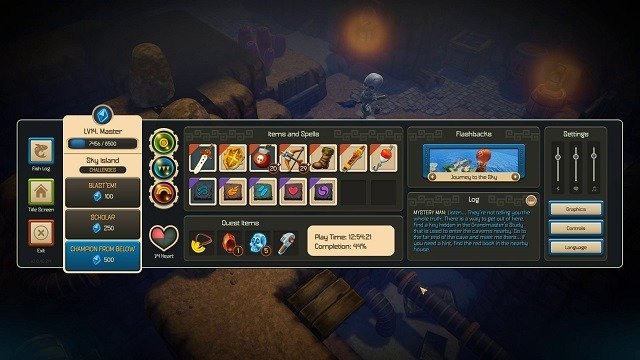 In addition to these familiar progression mechanics Oceanhorn also features a level up and achievement system which go hand in hand with the above systems in growing your characters potential. This improved potential comes in the form of things like better stamina to speed up your exploration or extra inventory slots that help you manage the growing roster of game items.

Games Finder is a Steam Curator and featured in the aggregate review scores data of MobyGames and Neoseeker.
FEATURED ON
Games Like Bastion, Games Like Cube World, Games Like Zelda, Games Like Zenonia
1 COMMENTS
LEAVE A REPLY Cancel Reply