OGame is a long standing browser based management game that was created on the turn of the century. While simplistic in design this space themed title has continued to hold an impressive audience despite newer games regularly entering this market. 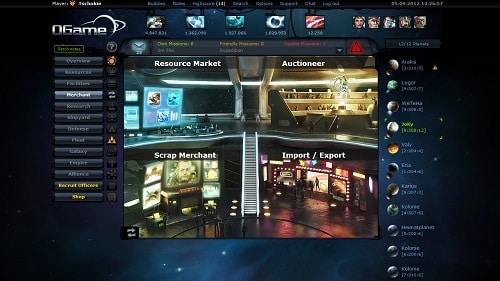 OGame is entirely browser based with players navigating the various game sections through individual webpages rather than a single flash element like comparable games. This hasn’t held the game back from having dozens of active universes (servers) at any time. Within these universes you’ll find nearly a dozen galaxies, hundreds of systems and then dozens of planet slots.

These planet slots are randomly assigned to players upon starting the game with the option to later move to other planets to expand their galactic civilization. From this home base you’ll command your construction, missions and a range of research. All of these actions consume one of the five key resources of the game; metal, energy, crystal, deuterium and dark matter which come from the usual resource generation (mining), raiding and trading means.

As such players will do plenty of raiding of other players which is done through your spacecrafts. These are not controlled directly though and sent out on missions in fleets. Settled in rounds these conflicts can be focused on resources or opponent fleet destruction depend on the intent and resources desired, successful defences are possible and since lost ships cannot be recovered OGame does tip the balance in favour of the well prepared defender. 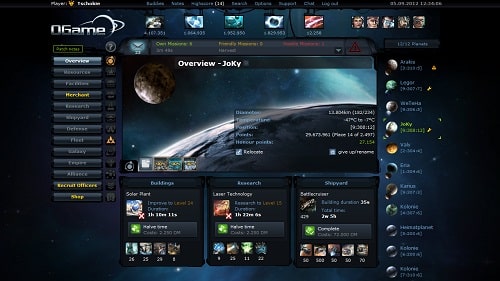 Players in OGame are encouraged to not play alone in the vacuum of space through a strong alliance system where players team up for attacks, defensive purposes and resource sharing. Joining an active alliance is one of the key ways to achieve longevity from the online game.

The age of OGame speaks for itself, the sheer fact that game has maintained an audience in this competitive space is proof of its quality.

Games Finder is a Steam Curator and featured in the aggregate review scores data of MobyGames and Neoseeker.
FEATURED ON
Games Like Travian
1 COMMENTS
LEAVE A REPLY Cancel Reply