One Epic Knight sticks to the popular Temple Run formula pretty closely in terms of gameplay but had a few fun innovations that make it a must install for endless running fans that want something different. 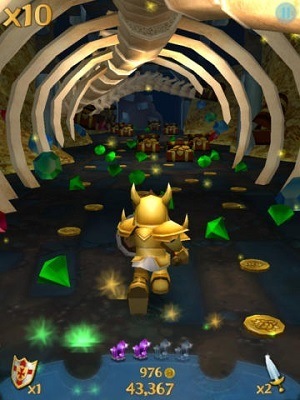 In One Epic Knight you’ll command a knight as he traverses into a dungeon where you’ll gather treasure, avoid traps, jump over holes in your path and destroy enemies with a sword. The introduction of interesting traps (such as the swinging axes) and enemies that will try to block your path adds a great deal to the otherwise standard features of the game and make it a bit more tricky to master.

The rest of the gameplay experience in One Epic Knight is as expected with 3 lanes to move your hero across, coins to collect and upgrades to spend these hard earned coins on. All of your actions are controlled through swiping from changing lanes, sliding under obstacles, to jumping over the gaps in the path or turning corners. These controls are always responsive to prevent frustration but also require quick reflexes to use effectively as the game quickly throws multiple obstacles at you in quick succession.

To help extend the life of your knight One Epic Knight will occasionally drop swords, shields and mana along your path. Swords will let you dispatch a single enemy while shields are perfect at letting you break down a trap that blocks your path. Mana is a little harder to use as players must collect 4 mana crystals to activate this ability but offers a greater reward by buffing your knight temporarily to become invulnerable and collect all loot that he encounters. Each of these special power-ups comes with 6 level of upgrades which are purchased with coins you’ll find littered on the dungeon floor. 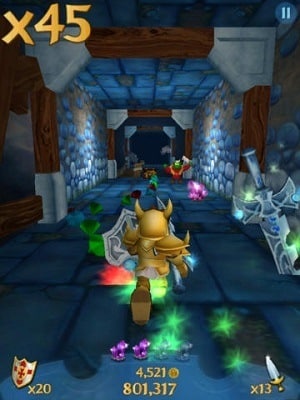 Collecting coins is possibly the weakest part of One Epic Knight with small coins that easily blend into the background and mean you are likely to realise there is a trail of coins right next to you, a little too late.. This is particularly frustrating due to the large range of fun items to spend this loot on in the store between runs. In addition to the various power-up upgrades mentioned above the powerful single run potions that offer fireball protection, reduced mana requirements and many more powerful concoctions. For the truly dedicated knight who manages to amass a small fortune of coins the passive trinkets and unique costumes give you something else to aim for.

The addition of enemies combined with the impressive list of things to spend your coin on makes One Epic Knight one of the better experiences in the genre which won’t disappoint endless running addicts.