Orcs Must Die! 2 is a trap based shooter where you’ll fend of wave after wave of orcs using various upgradeable traps and weapons. Unlike the original game the emphasis this time around is on the co-operative campaign which expands on the experience by allowing you to share it with a friend for the first time. 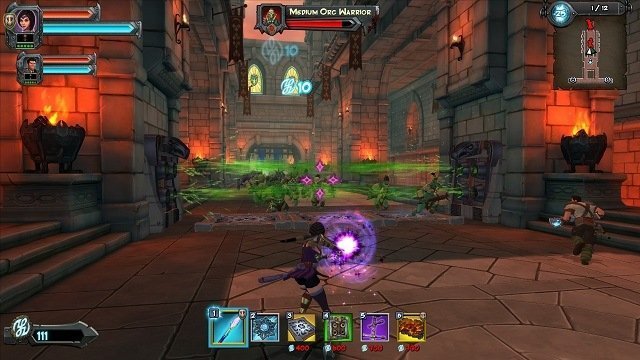 Set just a few days after the events of the original Orcs Must Die! title players will now also have the opportunity to take control of the Sorceress who stands alongside the War Mage to bring back balance to the world through opening new rifts. It’s a change of pace in the story but fits perfectly into the co-operative focus of the second installment of the franchise. Focused more on using spells and her traps the Sorceress offers an alternative experience with each character having a small number of unique traps and items.

Both the Sorceress and the War Mage are available to play through the campaign solo and despite their unique traps is generally well equipped to handle the levels (bar a few that are near impossible without co-op at the higher difficulties). Everything feels better in the co-operative environment though where the characters can cover their weaknesses and smash the orc hordes together.

New characters aside the gameplay offered in Orcs Must Die! 2 lines up with that of the original with players placing traps and using various weapons to dispatch a wide variety of orcs. From heavy armour, flying creatures and towering ogres each have their own health and mechanics that are countered through different strategies. Paying close attention to the pool of orcs is vital in taking the required traps and weapons into each level. 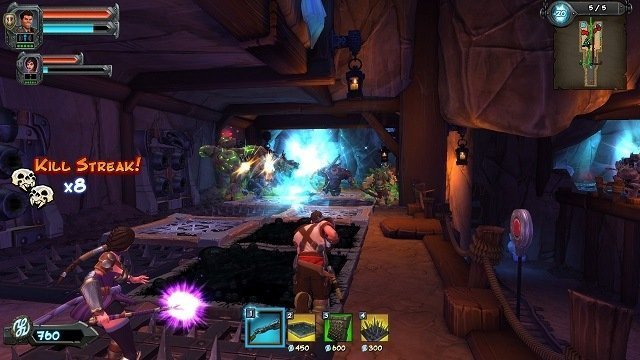 Tower defence mechanics are still central to the game and again has many similarities to the original title with players having a limited number of rift points in each level that are reduced after each death or if an orc makes it through the level.

Based on your performance in the level players are awarded skulls which can be reinvested back into new traps, trinkets or costumes to help you face the ever increasingly difficult levels. With the added ability to reset these whenever you please players can experiment freely with new combos without punishment. A total of 10 traps or trinkets can be taken into each single player level although this is cut almost in half for co-op levels.

Traps are broadly split between floor, wall and ceiling traps that each offer a variety of damage, cooldowns and utility. Additionally trinkets give you powerful weapons with their own utility that you can use at the cost of your mana bar. A majority of these will be familiar to players of the first game but there is still a healthy variety of new options along with new upgrades for them. 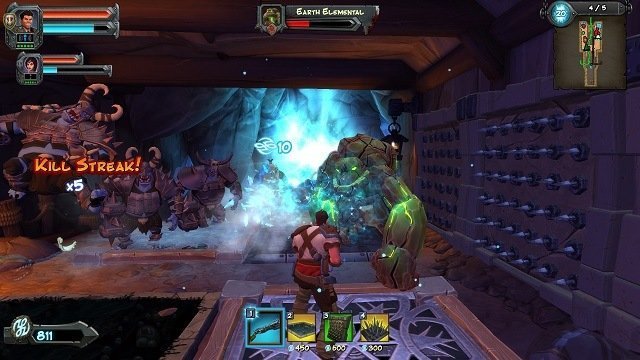 While the number has been expanded dramatically this has also led to certain traps simply being obsolete due to better variants that make it hard to depart from the optimal setup. Even more problematic is that even the most die hard fans will struggle to earn enough skulls to upgrade everything fully which can mean some tedious resets of skulls throughout the campaign for you to overcome levels with particular setups.

The original was a unique hit that proved highly popular and the sequel is no different. The addition of co-op gameplay and a host of new traps makes the sequel even more enticing than the original.

Games Finder is a Steam Curator and featured in the aggregate review scores data of MobyGames and Neoseeker.
FEATURED ON
Games Like Fortnite
LEAVE A REPLY Cancel Reply