Originally considered the worst game of all time ORION: Prelude (previously under the name Beatdown and Dino Horde) has stayed strong since its 2012 release to turn itself into a fun co-operative shooter. 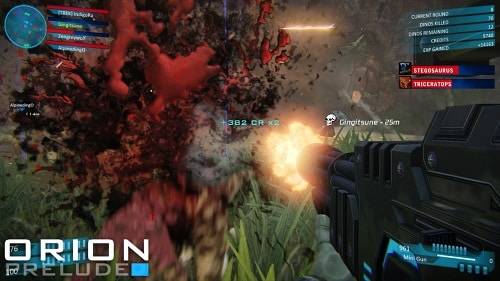 At the core ORION: Prelude is a sci-fi first person shooter that puts you and several friends on large maps with dinosaurs, vehicles, perks and various weapons. There is a vast number of game modes also available that broadly fall into co-op, open world, PvPvE and duel.

The game mode you’ll generally find yourself in though is the survival mode which is a wave based dinosaur challenge that spawns increasingly powerful dinosaurs that you and your allies will have to dispatch while using the credits and experience earned to beef up your arsenal. Dinosaurs range from small raptors and dilophosaurus to flying dinosaurs and the gigantic stegosaurus, triceratops and of course T-Rex

Other popular servers include rampage which lets you take control of dinosaurs, stealth elimination and free for all. All in all there are over a dozen variants that vary in popularity but is generally not too hard to get a server going for your preferred game type.

Regardless of game mode players can choose to take the field of battle as one of the three available classes. This includes the assault who is armed with a jetpack to reach new heights, the recon who has the power of invisibility and the medical engineer that can support the other classes. In addition to the unique gear each class also has their own augments which act as perks for the current game. 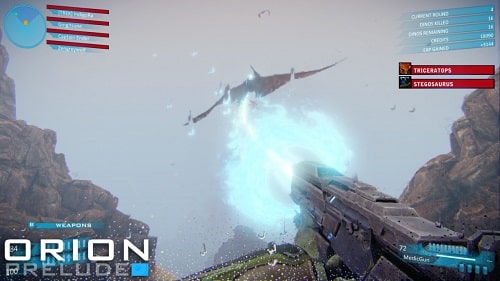 Recon players for example can unlock bonus damage when attacking from behind, fire certain weapons while cloaked and extend their cloak duration. There are also a large number of common augments that can increase your accuracy, remove fall damage, carry more weapons, double jump, extra credits for kills, health regeneration and many more.

With the price tag of the title and the often wacky nature of gameplay you’ll definitely get your dollar’s worth.

This review was first published on May 18, 2016. Read our update policy to learn more.

Games Finder is a Steam Curator and featured in the aggregate review scores data of MobyGames and Neoseeker.
FEATURED ON
Games Like Ark: Survival Evolved, Games Like Halo, Games Like Killing Floor, Games Like Quake, Games Like Warframe
LEAVE A REPLY Cancel Reply