OurWorld (stylised as ourWorld) is a free to play virtual world where tweens and young teenagers can explore a virtual world, participate in online games and interact with other players in various in game locations while listening to a range of in built game soundtracks.

Developed and maintained by FlowPlay the ourWorld can be played on Windows and Mac through a downloadable client and it is accessible for low spec computers or laptop gaming. ourWorld also conveniently offers the ability to play as a guest (although your progress will not save when opting to play in this mode) which allows you to jump online quickly without having to create an account first. 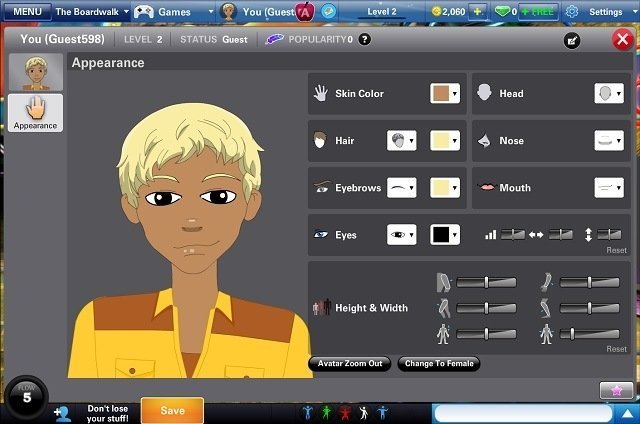 To begin your ourWorld experience you’ll select from over a dozen base female and male avatars with further customisation available as your first in game task. The usual options are included in ourWorld with the ability to alter your skin colour, head, hair, nose, eyebrows, mouth and eyes alongside a number of sliders to customise your body shape. Players in ourWorld are also not restricted to a single gender and can swap between female and male avatars as they wish.

Further customisation is offered through the in game inventory element of ourWorld where clothing items such as pants, tops, coats, hair styles, accessories and shoes is unlocked through gameplay or purchased from the various in game stores for coins. Gameplay unlocks are primarily earned through the level up system of ourWorld whereby you’ll earn powerful Flow currency to spend on the PrizeWheel, Bubbler or daily gem (premium currency) jackpot.

Alternatively players can jump into one of the 50+ flash games across puzzle, strategy, arcade, matching and action categories where you can earn coin game currency or Flow for ourWorld exclusive games for your participation. ourWorld does a fantastic job of ensuring there is a style of game for all players although the All Games category is intended to pass the time rather than expanding our ourWorld character’s inventory and funds. 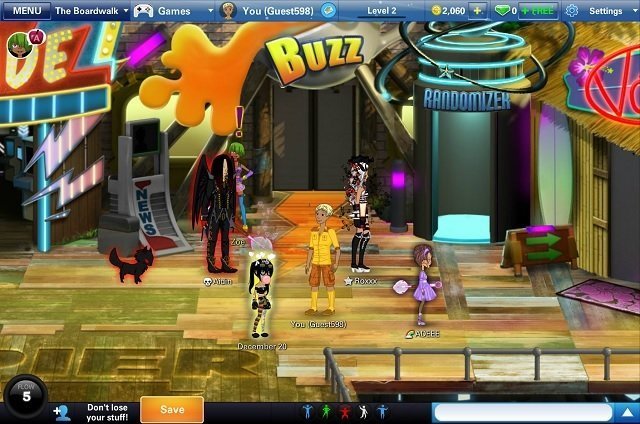 This All Games category is similar to what you would find on other flash based gaming websites with a range of puzzle tower defence games, simple adventure titles, racing adventures and everything in between. The selection is generally of solid quality although just like other flash based game repositories there are some duds from time to time that you’ll have to weed out. While some challenges and badges are linked to the game section these are generally not restrictive to where you have to play a single game that you might have no interest in playing.

Chances are though you’ll be spending more of your time in the unique aspect of ourWorld which is the social experience it offers. This social experience is split over 8 game worlds tied to level unlocks with each having their own stores, social hubs and exclusive games. 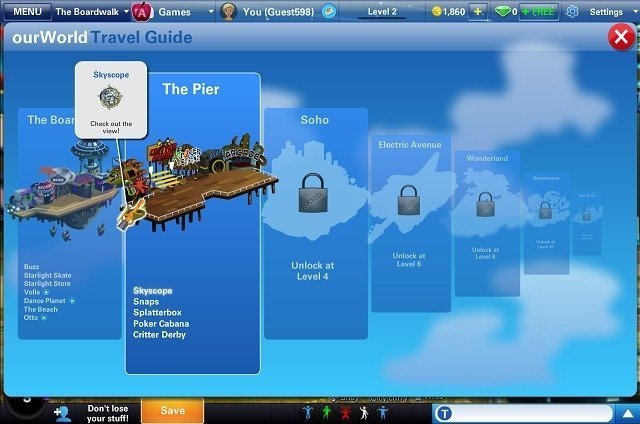 Each of these locations can support other players although the community generally hangs out in the hub areas where you can walk around the environment, show off your unlocked dance moves, challenge players to a dance off, chat to them directly or form a longer term friendship through the buddy and relationship systems. The social system in ourWorld also goes beyond the basic integrations that most online virtual worlds offer with further depth available through contests, interest groups, item gifting, adoption, marriage, pets and a popularity rating system.

With the wealth of social mechanics its easy to understand why ourWorld despite its ageing visuals and flash based design has managed to maintain a consistent concurrent audience of thousands of players. It’s also in part to the range of long term objectives the game offers such as filling up your album, customising your condo, unlocking all challenges, achieving badges or completing all of the GetUpz outfit collections.