Expanding out into the world of the supernatural Oxenfree offers a unique mystery for players to uncover across a large number of game platforms which slowly expanded following the initial release success. Marking the first game from Night School Studio’s their creation attempts to deliver a highly story driven game with paranormal elements without the use of cutscenes in a 2.5D game world. 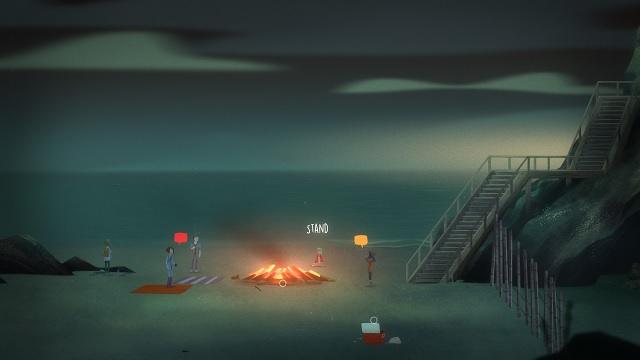 In Oxenfree players take on the role of Alex who is a teenager on a visit to the local island with his friends to attend a party. Joined by your friend Ren and Alex’s stepbrother Jonas players quickly meet up with other staple characters of the story. This includes Clarissa who was previously your brothers girlfriend before he passed away and her best friend Nona who is a love interest of Ren. With many relationship links between the group these are explored at various parts of the game story and provides the foundation of the story that is about to evolve.

With the island having been an ex military base and the islands only permanent resident having recently passed Oxenfree quickly establishes a setting that is mysterious for these events to unfold. Oxenfree wastes no time after your arrival though with Alex and friends experiencing a series of supernatural events that leave them frazzled and unravelling the secrets that the island is hiding one important decision at a time. After the dozen hour story players will find that all of these decisions impact your eventual game ending that you receive. With a total of 7 broad game endings based on the final state of your character relationships you’ll have plenty of opportunities to replay the story. 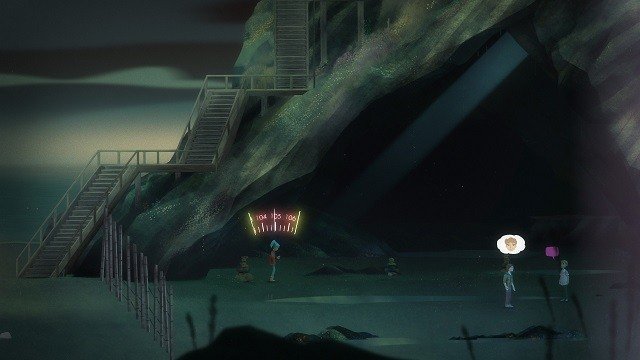 All of these decisions are made through the 2.5D presentation of the Oxenfree adventure with players directly controlling Alex and her actions which revolve around interactions with her friends and attempts to undo the paranormal force that is wrecking havoc on the island.

A fundamental gameplay mechanic of Oxenfree is the players ability to freely walk around the game world even during dialogue sequences allowing players to focus as much on dialogue as they consider appropriate. Players can also interrupt characters if they have already made up their mind and don’t want to hear what they have to say which does also have the side effect of speeding up game replays. In these dialogues players are often presented with two or three dialogue choices which further drive the story into a particular direction and can have long lasting story impacts. This impact also extends to the relationship Alex has with each character with changes to this also depicted above their heads so that you can understand your current position. 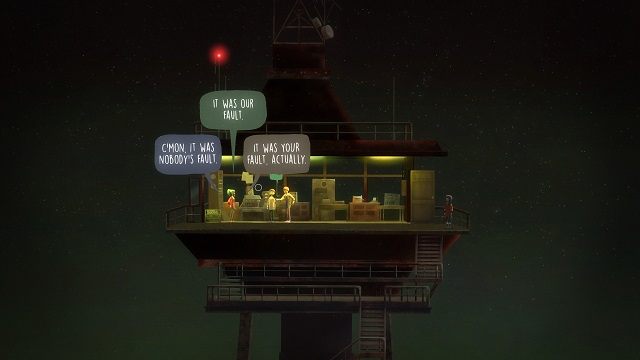 Other game mechanics include basic interaction with in game world objects and some simple puzzles that utilise this mechanic although these are not complex or the focus of this adventure. Supporting the story focus Oxenfree is free of game over screens with players simply receiving an alternative ending, this design does also encourage replay value as you change your decisions to uncover the impact.

Games Finder is a Steam Curator and featured in the aggregate review scores data of MobyGames and Neoseeker.
FEATURED ON
Games Like Firewatch, Games Like Life is Strange, Games Like The Walking Dead, Games Like Until Dawn
LEAVE A REPLY Cancel Reply