After a late night party wakes you up and renders you unable to return to sleep you decide to do what any reasonable person would do in a video game and opt to go on a rampage to silence the party. This strange setting is exactly what Party Hard throws you in as you play the role of serial killer, making sure all party goers are eliminated and allowing you to return to sleep. Originally released for computer gamers and later coming to the console environment Party Hard is a weird mixture of stealth and carnage like no other video game title. 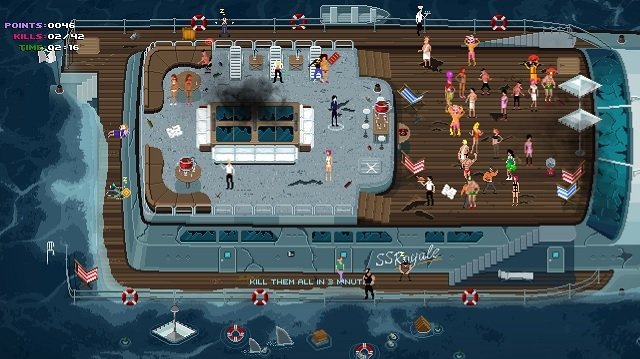 With the goal not to be caught in the act though Party Hard is more than just a game a bout killing with players having to be strategic and utilise the level environment to assist them in their ultimate goal. In total there are 7 core characters that you can unlock as you play that start with Darius who is just trying to get some sleep and has no specific mechanics to his gameplay style.

In time you’ll unlock characters like the Policeman who can remove bodies without arising suspicion although is unable to interact with some elements of the environment and the Ninja who can turn completely invisible if he stands still and can throw smoke grenades for further sneaky gameplay. With each introducing their own mechanics and having unique methods of unlocking them this provides a mini-game within Party Hard as you challenge yourself to unlock all the characters and try them out on the various game levels. 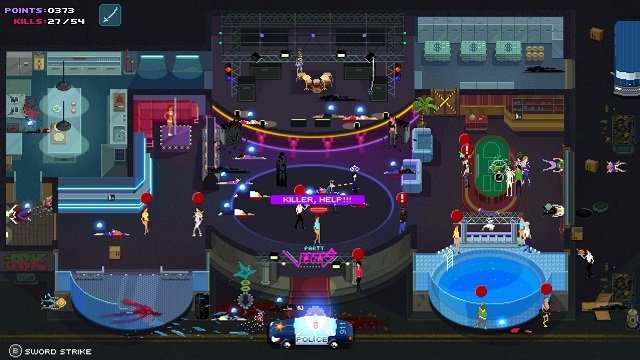 These levels are self contained with a total of a dozen within the main story line with an additional 8 unlocked after finishing the game some of which are a call back to the main levels albeit with slightly altered designs. Levels are fantastically diverse in Party Hard and have their own layouts, interactions, security and escape paths soundtrack and total number of partygoers which is generally somewhere around 40 potential victims.

From a casino party that offers a dance area with speakers just waiting to crush an unsuspecting dancer to a Miami beach party that lets you spike the punch bowl and a campus party that has gumball machines in the corridors that might just fall over. Some of these traps feature regularly across levels to give you a familiar trap to work with although does spoil some of the unique feeling that each party offers. Each level also has the potential to offer specific items, escape routes or shortcuts to quickly move through the map, dumping locations to dispose of your deadly deeds and phone call events that let you trigger something on the map by making a phone call. With each separate map layout and the randomised events that happen during the level and your own pathing there is some good replay opportunity across Party Hard. 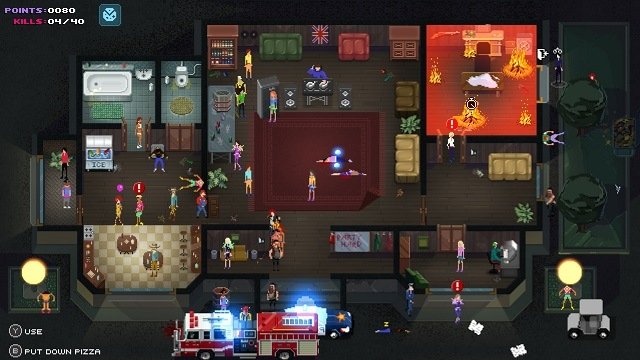 In addition these traps players will rely on their knife, smoke grenades, stun bombs, bombs and poison to achieve their objective. As noted players can’t just rampage though as if spotted by another party goer killing someone they’ll soon have cops taking them away although you have a small potential window to evade cops using escape routes which are sometimes limited by the level layout.

This turns Party Hard into a game of carefully analysing the actions of the people at the party and planning your attacks against single targets or sometimes if carefully planned multiple people. Combined with the dark humour and stealth action of Party Hard it’s a unique and challenging experience as you wait to spring your traps on lone party goers.

Games Finder is a Steam Curator and featured in the aggregate review scores data of MobyGames and Neoseeker.
FEATURED ON
Games Like Hitman, Games Like Yandere Simulator
LEAVE A REPLY Cancel Reply