Path of Exile is a free to play action role playing game that draws plenty of comparison to the Diablo series and in particular Diablo 2 for its similar dark and foreboding atmosphere that has players starting from scraps to fighting against uber monsters with legendary gear. Path of Exile has been widely praised as capturing the best of the Diablo franchise and expanding on it with its own unique and well-polished ideas particularly in the department of character customisation and depth. 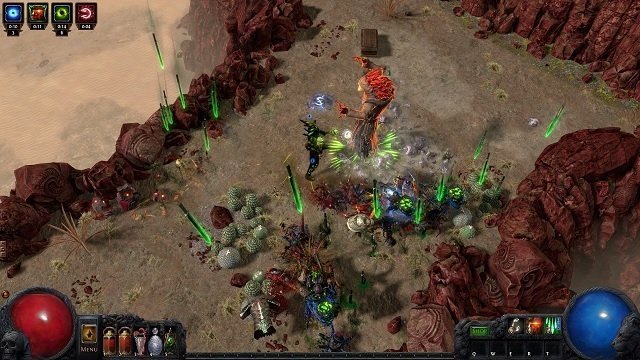 Developed from a small team of New Zealand developers Path of Exile is clearly a labour of love that has expanded far beyond the original concept and exposure the developers expected with the Diablo community grabbing firmly onto the Path of Exile experience. While Diablo is a clear source of inspiration for Path of Exile it’s much more than a mere Diablo clone.

Notable differences with Path of Exile include lack of in game currency, 7 characters free of limitations, huge passive skill tree (affectionately the passive skill forest), items dictating active skills, competitive ladders and the free to play price tag. Replacing in game currency both for player to player trades and NPC trading is a robust bartering system that focuses around items such Scrolls of Wisdom (which identify items), various orbs, crafting items, shards and a number of rare currency items. The majority of these base barter items are consumable in nature which helps to offset ongoing inflation that games in this genre can quickly suffer from with traditional game currencies as they age and ultimately rendering them useless. 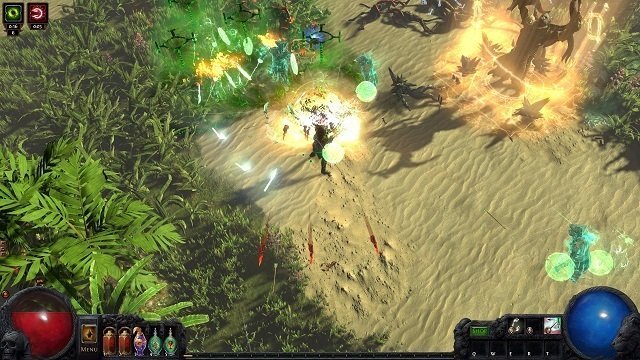 A smaller number of these currency items and a number of the extremely rare ones can also drop from the game world when playing as one of Path of Exile’s 7 character classes. These include the Marauder, Ranger and Witch who serve as the pure characters, aligned to a single game attribute of strength, dexterity and intelligence respectively and often recommended to new players for their first character. Next are the 3 hybrid characters that specialise across attributes with the Duelist, Templar and Shadow. Finally, the Scion is a perfectly balanced class although not available to new players when creating their first character.

On a passive skills front there are a total of 1,300+ passives to choose from with each of the game classes having access to the same tree although their position and path is generally different for their standard builds. The design does allow players to easily create hybrid classes should they wish by capitalising on the notable and keystone passives which provide significant improvements or completely alter functions of a character. A single passive point is provided when players level up (maximum level of 100) along with another two dozen from in game quests. 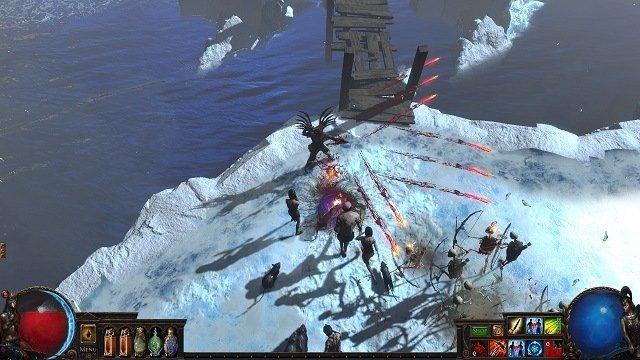 For active skills though action RPG veterans will be surprised to see no such skill tree within Path of Exile which instead relies on a gem socket system of over 350 gems. By placing gems into your equipment you’ll unlock active skills which can also then be improved through support gems that provide various augmentations from improved damage, reduced cost or better protection. Support gems must be linked with an active skill socket though which comes down to the item randomisation system for the number, position, type and linkage of sockets to expand the loot hunt beyond the typical action RPG experience.

With the depth between the active and passive skill trees combining with a total of 10 game Acts the dark Path of Exile world of Wraeclast houses countless solo and party based adventures as you defeat champion monsters, collect loot and explore randomly generated maps. For the competitive player that wants the game to remain fresh Path of Exile utilises a season mechanic known as Leagues where new ideas are tested, modifiers alter the experience and currencies are reset. Fans of Diablo can rejoice the amazingly impressive action role playing game that is Path of Exile.

This review was first published on November 30, 2014. Read our update policy to learn more.