Originally for Windows, Mac and PlayStation 3 PixelJunk Monsters offers tower defence mechanics while putting players closer to the ground with their own character to control throughout the strategy gameplay. With the success of this unique take combined with the challenge on offer the game was later released on other platforms under the PixelJunk Monsters: Deluxe name which bundled an expansion pack (Encore) with the base game. 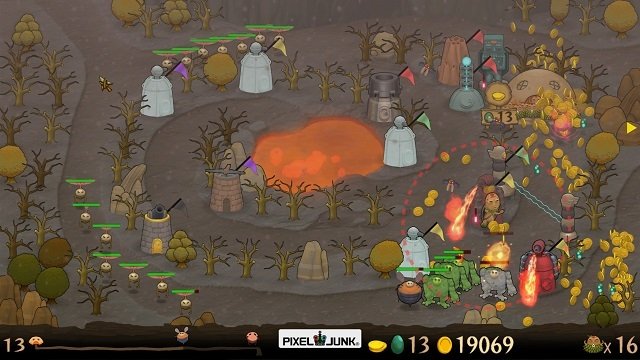 At the core of your experience you’ll find the gameplay in PixelJunk Monsters is fairly similar to other titles in the genre with players building up their defences using a variety of towers at their disposal that come with their own stats. Enemies will enter the map from a single or multiple points and attempt to make it to the end of the path (to attack your base) without dying to your defensive placements. It’s a well known formula that finds itself in-between the puzzle and strategy genre with PixelJunk Monsters focusing on the higher end of the market in terms of difficultly for those that appreciate a challenge.

Much of this challenge stems from the one core element that PixelJunk Monsters does differently to the standard tower defence genre. Instead of overseeing the battlefield as is standard players are instead in control of a character on the ground that must run around to build the necessary towers and collect the coins that are dropped from enemies. With this added strategy depth of ensuring your character can make it to key locations to erect a vital tower while collecting the funds to do so along the way it not only boosts the challenge but also adds a more active component to gameplay which is something that the tower defence genre often lacks. 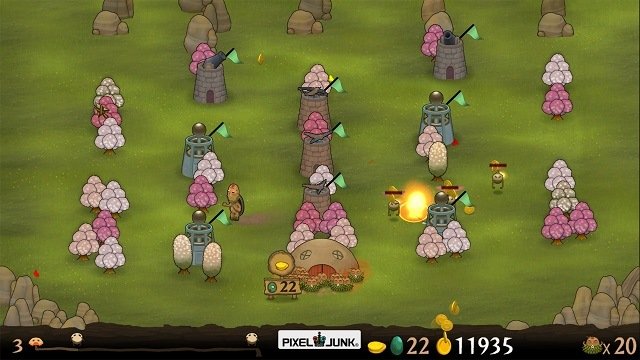 In PixelJunk Monsters towers come in a variety of forms with each having their own strengths and attributes that need to be balanced to the terrain, enemy and your available funds. Combining them together to make a powerful defensive grid is of key important in PixelJunk Monsters as solo towers are rarely effective to your overall success in each level. As one would expect some towers are better suited for long range attacks, countering air units or slowing down large enemy assaults so they can be picked off by other towers.

In total PixelJunk Monsters offers an impressive 12 tower options which is far above most other titles in the genre, although some seem almost redundant compared to similar options that can do the same task but better. Regardless players can build the likes of arrow, cannon, anti-air, ice, laser, gem, lightning, fire with their own attack patterns and visuals. You’ll also find familiar mechanics with every kill you’ll gain some coins to build more structures, research new ones or upgrade already built ones. 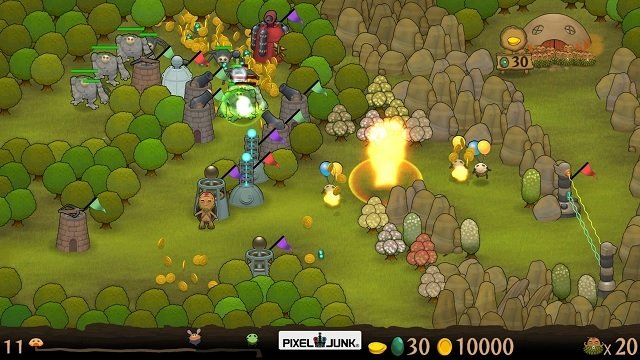 With over 20 core levels in the base game and nearly 40 with expansion factored in PixelJunk Monsters is not shy on level offerings either and combined with the trio difficulty model does allow for replay value for those that want to perfectionist complete the game on the toughest difficulty level. For the truly dedicated a challenge system is also available to push players to use particular setups they might not use otherwise.

Overall you’ll find that the move to putting players closer to the action is a fantastic addition to the tower defence challenge while also providing a higher level of active gameplay loop in a sometimes stale genre. With the underlying sound mechanics of tower variation, difficultly selection and challenges on top you’ll also find yourself never short of a stretch goal to chase.