Plants vs. Zombies Heroes brings the popular lore and world of Plants vs Zombies into the digital collectible card genre. Playing as either Plants or the Zombies you’ll devise your ideal deck of cards and play them on the game field in an effort to counter your enemy. 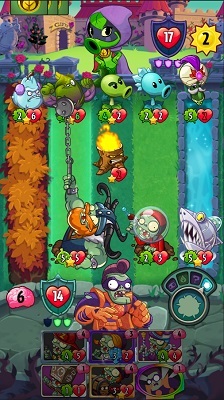 The fundamental mechanics of Plants vs. Zombies Heroes will be familiar to many who have played a card collecting game on mobile before. However, when wrapped in the brilliant design of the PvZ franchise you’ve got a potent game title on your hands.

The basics see you building a deck of 40 cards which are earned with gameplay and broadly fall into the categories of plants (or zombies) and tricks which can generally buff your cards or deal damage directly. With 40 cards to play with you can employ a range of strategies in an attempt to defeat the opposing team’s hero character.

Plants vs. Zombies Heroes adopts the same 5 lane design as the core franchise and also introduces the likes of water and rooftop lanes which restrict the cards you can play on those lanes. Unlike the original game though each lane is generally limited to only a single plant or zombie unless the card has the team up ability, increasing the maximum cards per lane to 2. 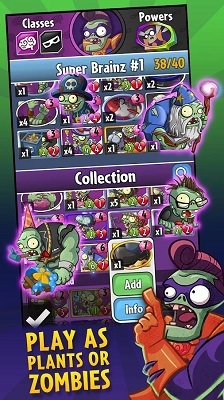 Calling the cards into battle requires sun (or brains) and each has their own costs associated along with a health and damage number. Cards are played in one of the four game phases which happen in order of; Zombies Play, Plants Play and Trick, Zombies Trick and Fight. During this final phase all cards will attack and counter other cards in their lane, in the case of an empty lane they will instead attack the hero behind the lanes.

These heroes come in 11 forms for both the Plants and Zombies teams which bring their own unique attributes to the game, some of these are from the previous games in the franchise. Similarly the freemium design of other titles are also borrowed, allowing players to complete quests or watch ads to obtain all content without the need of in app purchases.

Games Finder is a Steam Curator and featured in the aggregate review scores data of MobyGames and Neoseeker.
FEATURED ON
Games Like Clash Royale, Games Like Hearthstone
LEAVE A REPLY Cancel Reply