Can you resist the urge to not touch a big red button right in front of you? Please, Don’t Touch Anything challenges that assumption with a puzzle game with real consequences depending on your actions. First released on PC the game was later expanded to console and mobile platforms allowing a broader audience to test themselves on this brain teasing puzzle designs. 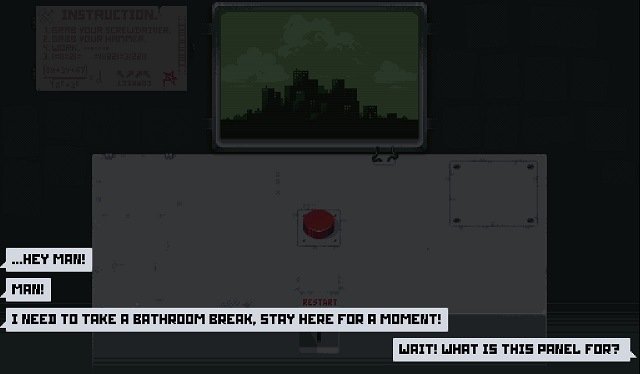 Please, Don’t Touch Anything is a cryptic game title at heart that will test your brain as you try to find the 25 game endings by exploring the full array of options and sequence of actions. In order to do so you’ll have to solve various subtle hints, test out different assumptions and ultimately press the big red button to see just what you’ve accomplished.

The setup for this strangely satisfying button puts players in front of the strange grey box after a colleague steps out to take a bathroom break. From here your Please, Don’t Touch Anything adventure begins with the simple grey box in front of you and a large red button in the centre just begging to be pressed. Like any curious person you begin playing with the contraption in front of you instantly and realise there is more to it than meets the eye.

Alongside the red button you’ll find a screen that depicts a city with an eerie green glow and some pictures that may or may not provide you clues to progress. While your options from the start of the game are minimal you’ll quickly find that the grey box hides many secrets with new levers, buttons, keypads and everything in between waiting behind the right sequence of player initiated events. To help players track your endings progression (split between 24 core endings and then your final true 25th ending) you’ll find some handy lights appears on this grey box once you achieve a single ending.

Curiosity is really the key to seeing all the content that the game has to offer with trial and error giving you your first two or three endings quite easily. The remaining two dozen or so though will require careful study of the limited information around the box with a small number being particularly maddening that you might turn to a walkthrough for. 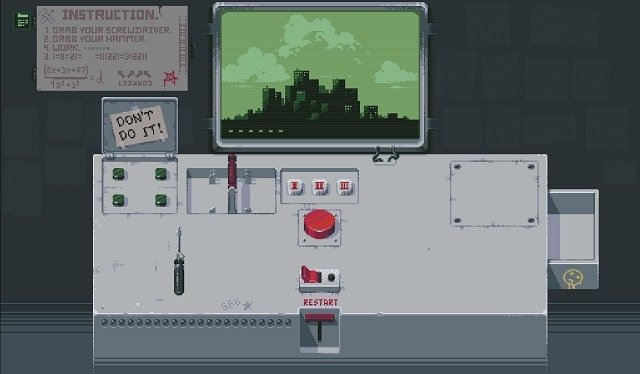 In addition to this discovery driven gameplay you’ll enjoy a number of pop culture references and a witty sense of humour sewn throughout the experience that also helps mitigate some of the frustration that you might have while chasing all possibilities. It never really evolves into more than a few interesting gags and puzzles though, which isn’t necessarily a bad thing as long as you go into the Please, Don’t Touch Anything knowing this. Ultimately for the price you’ll get your value worth provided you chase all the potential endings without too much external support. Although players should be aware the controls on iOS and Android devices in particular are less than ideal due to size constraints that makes this likely a PC preferred title.

This review was first published on March 20, 2016. Read our update policy to learn more.

Games Finder is a Steam Curator and featured in the aggregate review scores data of MobyGames and Neoseeker.
FEATURED ON
Games Like Papers Please, Games Like The Room
1 COMMENTS
LEAVE A REPLY Cancel Reply