Mix Pokémon gameplay with the hilarious Adult Swim adventures of Rick & Morty and you’ll get Pocket Mortys a simple collect them all RPG that has you collecting and battling your own various Mortys from hundreds of possibilities. While simplifying the combat loop to a basic rock-paper-scissors formula the world design and Morty design of your Pocket Mortys adventure is truly fantastic for the die hard fan or new fan to the franchise. 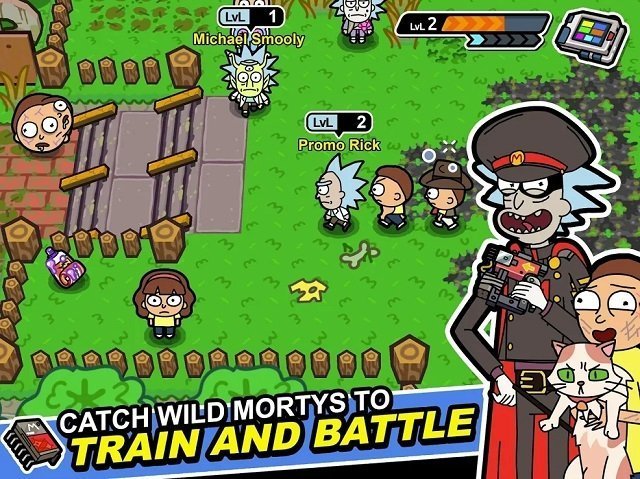 The game kicks off in the popular TV show garage with Rick working on a unique MortyPad device that is able to track the stats of other Mortys and thus allow them to be directly compared on strength. Like most Rick & Morty episodes though the game quickly deviates after Morty is taken by a mysterious Rick through a dimensional portal with Rick reluctantly stepping up to the defence.

This is where you’ll get the first taste of the combat system of the Pocket Mortys which in terms of user interface replicates the popular Pokémon adventure formula. For the most part though this mimicry is simply skin deep as the combat system is fairly stripped back removing the potential elements down to 3 (rock, paper and scissors). Each of the 300 odd Mortys is tied directly to one of these stats making battles a simple counter process with little room to win a mismatched battled without significant level advantage. 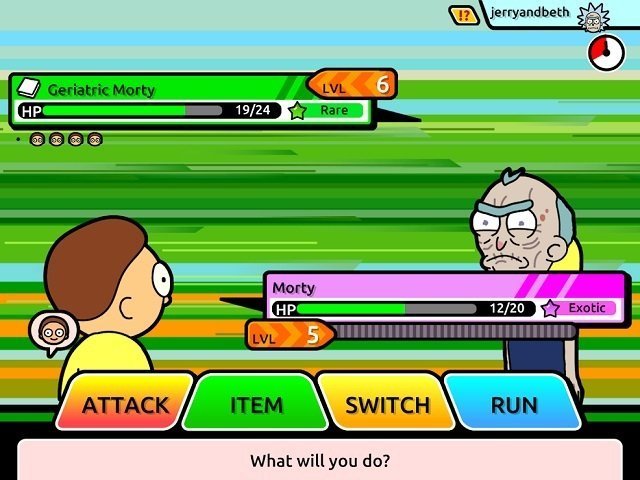 Just like Pokémon though players will select a Morty to send into battle and have the ability to select an appropriate attack move or use an item. Ultimately your goal is to keep your own battling Morty alive while reducing the enemy Morty down to zero health which results in them becoming dazed and unable to battle further. Success in the battlefield will not only allow you to advance but also awards experience and the in game currency of Schmeckles which are both used to improve your ability to win battles through new Morty characters, move sets and items.

Items are fairly diverse in the world of Pocket Mortys and does include a unique mechanic where items found can be combined to create healing serums, boosts, level up powers and other items based on the recipe used and fits in nicely with the Rick and Morty theme. The most important item on your travels though is the Morty Manipulator Chip which serve as your Pokeballs to capture Mortys such as One Eye, Karate, Moustache, Rainbow Shirt, Crazy Cat and many more unique variations with their own evolution paths. Evolutions aren’t entirely level based in Pocket Mortys with players needing two Mortys of the same type before combining them into an improved version with better stats. 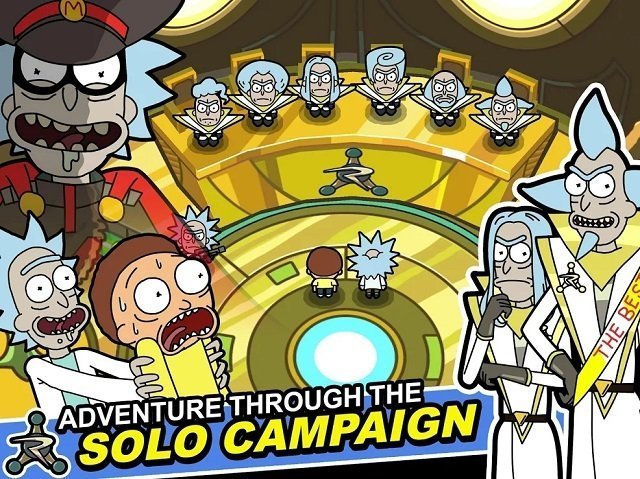 Of note is that Pocket Mortys launched with just shy of 100 characters and has steadily grown this number to over 300 through various events and content expansions and is a trend that is likely to continue while the game remains popular and holds an active community.

While collecting all Mortys is definitely a goal that some aspire to other players will likely opt to complete the story based campaign which requires players to enter dimensions to battle Ricks for badges before facing off against the council of Ricks who represent the 6 most powerful Morty trainers in the game world.

Games Finder is a Steam Curator and featured in the aggregate review scores data of MobyGames and Neoseeker.
FEATURED ON
Games Like EarthBound, Games Like Pokemon, Games Like Undertale
LEAVE A REPLY Cancel Reply