Primal Carnage is an online multiplayer shooter that focuses on PvP combat through savage class orientated matches that has a team of dinosaurs facing off against a team of humans. 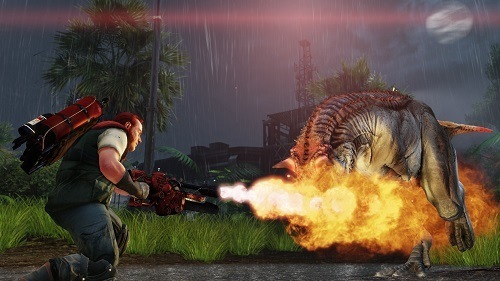 Set on a remote island after a dinosaur outbreak it is up to a team of mercenaries to find over the abandoned locations. This background helps set the game into a somewhat plausible setting but does not form a large part of the game.

Instead the game is very much gameplay focused with players jumping into one of the 9 large open maps which is then mixed in with three different game modes to offer a decent amount of variety. These maps range from overgrown research centres to abandoned docks which does tip the favour between different classes which encourages experimentation.

The three game modes on offer include a team death match where humans and dinosaurs will fight each other (and then switch sides), a get to the chopper game mode where humans must capture objectives on their way to an extraction point and finally a capture the egg mode that plays out like capture the flag but with dinosaurs.

Classes in Primal Carnage are well designed on both sides to ensure every type of human and dinosaur have a weakness. On the human side players can choose from a commando, scientist, trapper, pathfinder and pyro which gives the humans abilities like the flamethrower, sniper rifle, blinding flares and assault rifles. 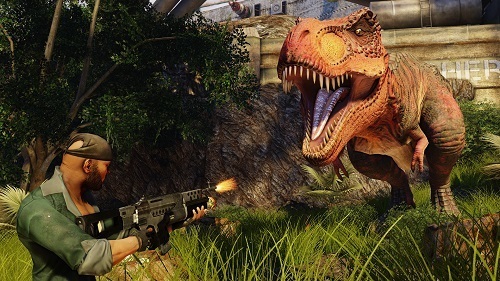 On the other side dinosaurs include the T-Rex, raptor, pteranodon, dilophosaurus and carnotaurus. This offers a mixture of flight, trampling, charging and the ability to jump onto humans and pin them to the ground.

Hunt and be hunted in one of the best team based games around, the mechanics might be simple but the variety and counter play is definitely there.

Games Finder is a Steam Curator and featured in the aggregate review scores data of MobyGames and Neoseeker.
FEATURED ON
Games Like Ark: Survival Evolved, Games Like Horizon Zero Dawn, Games Like Left 4 Dead, Games Like Monster Hunter, Games Like Warframe
LEAVE A REPLY Cancel Reply