Placing itself into the open world survival horror genre Project Zomboid (PZ) has been in development since late 2013. Throwing you directly into a post apocalyptic landscape ravaged by zombie infestation your goal is to survive and ideally thrive for as long as possible. The game is the first development project by The Indie Stone and received generally favorably by the committed zombie survival community for offering an experience that is highly realistic, vast and unforgivingly hardcore at times. 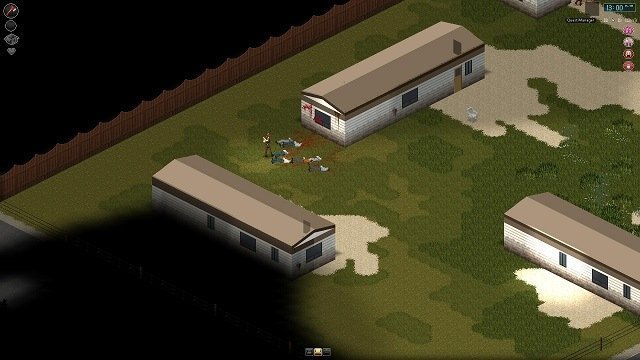 The setting for the game puts you into small towns in the US (Muldraugh and West Point) which has recently been quarantined from the rest of the world by the government after it has been overrun by zombies. Unfortunately with players finding themselves within this quarantined zone you’ll have to survive on what you can find within the zone to ultimately manage your mental state, hunger and tiredness. All of this and other elements of the game aim to push you towards a realistic survival game experience.

With no support from the government that has abandoned survivors within the town scavenging is your main way of achieving day to day survival. With what you scavenge from the houses nearby you’ll then funnel this into defences to hopefully last just a few more days against the zombie horde that you find yourself in the middle of. Players need not tackle this unfortunate situation alone though with support for online multiplayer on persistent servers or local 4 player co-op which can vastly improve your chances of survival.

A saving grace though is that the bulk of zombies you’ll encounter are slow moving although a few special and unique zombies are thrown in to offer a greater challenge and variety. While slow though the zombies are far from stupid and do have a number of deadly mechanics such as forming swarms along with reacting to light and sound. 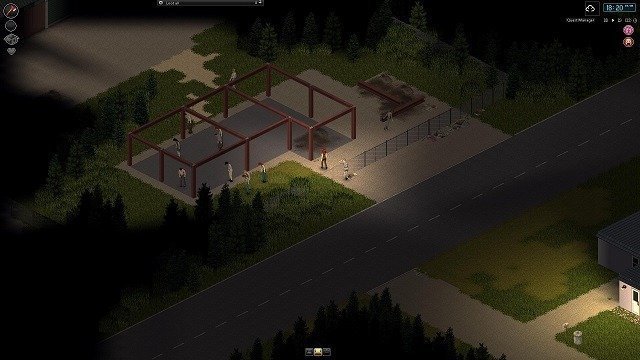 Players have full tools at their disposal to deal with these mechanics though by abusing the shadows and setting up their defences in such a way to minimise light and sound radiation that will attract swarms towards you. This level of mechanics design extends into other mechanics as well such as fully functional car physics, crafting mechanics, survivor management and various character skills.

When this all comes together your gameplay arc in Project Zomboid revolves around the looting of houses, establishing of well designed defences and management of your survivors. With depression, hunger and illness around every corner there is a reasonable chance that your end want be at the hands of zombie seeking to extract your brain from your skull.

The skills and crafting mechanics of Project Zomboid though are quite arguably the most attractive element of gameplay with skills for things like cooking, carpentry, farming and fishing to help you with your day to day activities. On the crafting side Project Zomboid offers a range of tools to turn chopped trees and other supplies into weapons, food and barricades against zombies. 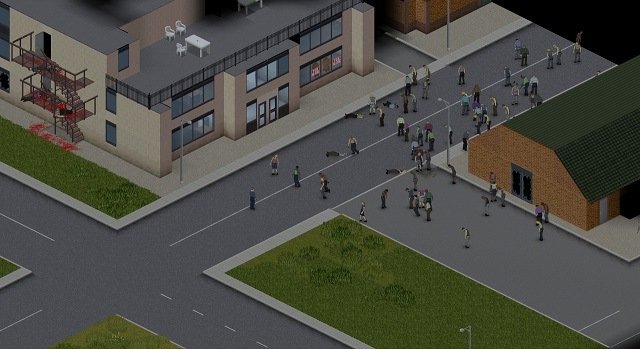 This key mechanic centred around crafting is what makes Project Zomboid a very attractive survival crafting adventure and must be mastered in the hopes of pushing your demise back one more day. Project Zomboid is truly a game that is more about how you will meet your end rather than avoiding it entirely.

While still going through development at the time of this review (early 2019) the game reviews speak for themselves, Project Zomboid is already in an extremely playable state and will likely continue to be until it’s eventual full release. For the gamer that craves in depth survival and crafting mechanics Project Zomboid despite it’s long development and outdated visual interfaces is one of the best offerings in the genre.

This review was first published on April 8, 2018. Read our update policy to learn more.

Games Finder is a Steam Curator and featured in the aggregate review scores data of MobyGames and Neoseeker.
FEATURED ON
Games Like 7 Days to Die, Games Like Dont Starve, Games Like H1Z1, Games Like Unturned
LEAVE A REPLY Cancel Reply