Puzzle Quest 2 like its predecessor blends role playing with puzzle elements to create an interesting gaming experience that offers simple match three gameplay but layers role playing, strategy and questing onto the adventure which has proven quite a successful formula. While originally launching for the Nintendo DS Puzzle Quest 2 has since been made available on a variety of platforms. 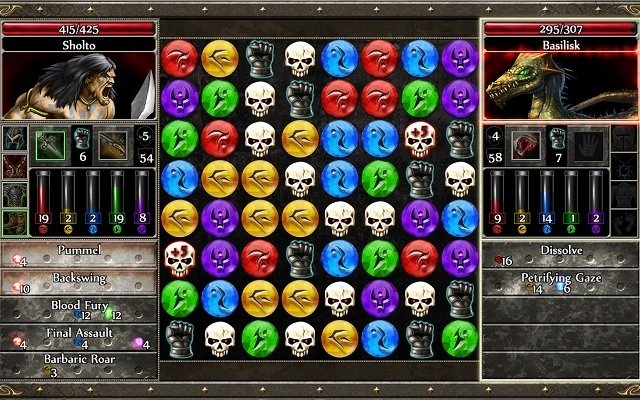 Like many titles in the role playing genre Puzzle Quest 2 has you travelling around the game world completing quests for the various non player characters that inhabitant said fantasy world. Underneath the surface of this world is the demon Gorgon who has spread his evil throughout the once peaceful village of Verloren who now turns to you as the hero and saviour of their town. While there are some branching paths throughout this journey to explore for additional battles and experience Puzzle Quest 2 is primarily a linear adventure with players travelling along a set intended path.

At the start of the game you’ll get the opportunity to pick from one of the four classes that each have their own gameplay style. Character classes include the all-round strong Barbarian, the Sorcerer who has lots of spells but lower hit points, the Assassin who has weak attacks but powerful combos and the Templar who is capable of absorbing lots of damage. Each of these is available in both male and female variants and allow you to cater towards your strengths in match three mechanics. Like the original players can further customise their Puzzle Quest experience through the five attributes (strength, agility, stamina, intelligence and morale) and items which ensures sufficient RPG mechanics are on offer. 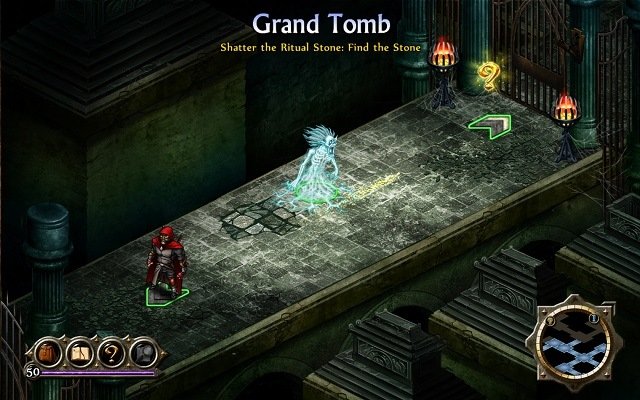 Combat is where the match three puzzle elements of the game show themselves with each battle taking place on a tiled matching screen that is separate to the overworld exploration. On the left hand side your character’s portrait, health, mana, weapon and spells appear with the game board in the middle and your opponent information on the right hand side. In order to win you’ll have to reduce your enemy’s health to zero which can be achieved in various ways while ensuring they aren’t able to inflict the same on you.

Similar to other puzzle matching games with RPG mechanics this is a shared game board with players taking turns with their enemies to move one of the board tiles. Said tiles include offensively minded ones like skulls and gauntlets pairing with the five colours of red, yellow, blue, green and purple which are each linked to a mana pool of that colour and enable spell casting. To add additional depth collecting four game tiles in a single turn allows players to take an extra turn. Given the shared game board avoiding setting up your opponent for an easy match four is an important consideration. 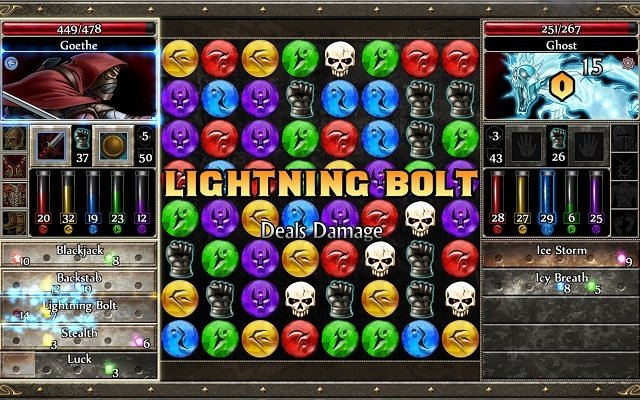 In addition to combat this matching mechanic is repeated across a number of other game types that appear throughout your adventure such as bashing open a door, lock-picking, magic unlocks, searching objects, trap disarm, treasure grabbing and training spells which require some variation of matching unique tiles in a specific manner.

When it all comes together Puzzle Quest 2 successfully builds on the foundations of the original and delivers a fun mixture of two genres that is ideal for those wanting basic mechanics wrapped within a fantastic RPG design.

Games Finder is a Steam Curator and featured in the aggregate review scores data of MobyGames and Neoseeker.
FEATURED ON
Games Like Battle Camp, Games Like Brave Frontier, Games Like Candy Crush Saga, Games Like Puzzle and Dragons
LEAVE A REPLY Cancel Reply