QUBE (Q.U.B.E.) is a puzzle game based around physics and platforming and combines them both in a unique and challenging gameplay framework. With similarities to other first person puzzle games such as Portal QUBE builds on the fundamentals established in these titles with its own variation of mechanics. QUBE was developed as an indie game and a finalist in the 2011 Indie Game Challenge. 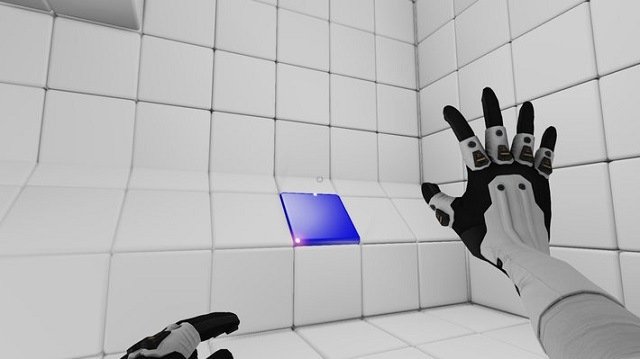 QUBE stands for Quick Understanding of Block Extrusion places the player into a strange mostly white environment which is made up of various sized blocks. Splitting its individual puzzle levels across rooms your objective is to work your way through the rooms entrance to exit which allows you to move into the next puzzle challenge. Like the best puzzle games in the genre mechanics are slowly introduced and built upon as you progress which increases the complexity of the levels but also your available tools to combat the difficultly. In the background of these levels are story elements where players learn more about the where and why of the abstract QUBE environment.

At the base level of mechanics QUBE equips players with a strange pair of gloves which allows interaction with the environment by activating different coloured blocks. These colours are not only a visual design but also a key puzzle element with different colours having various reactions once activated by your utility glove. 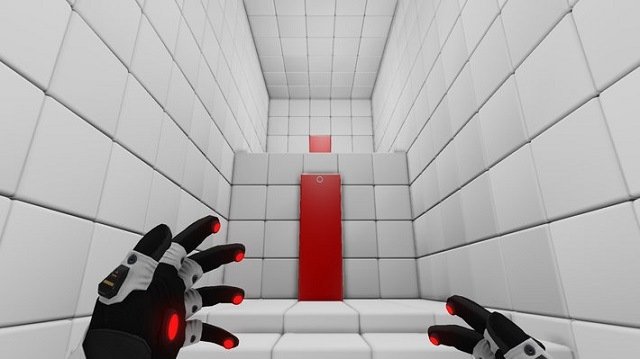 For example the first block you encounter is red which allows you to extend or retract parts of the environment and primarily used to remove objects out of the way or create bridges where necessary. On the other hand the yellow coloured block always appears in groups of 3 and allows players to create their very own staircase but more importantly select which of the 3 stairs will reach the highest point which creates some interesting puzzle dynamics at higher levels. Finally the blue cube when activated allows for players to create their own springs from the ground or propel themselves forward by utilising a wall.

While these coloured cubes form the fundamental puzzle mechanics QUBE also includes more freeform green coloured objects that are shaped into objects such as cubes or spheres and while they cannot be directly manipulated can be pushed and pulled in directions by using the coloured block mechanics above. On top of the campaign story a DLC titled Against the Qlock adds an additional 10 levels of more unusual puzzles which challenges players to complete them as fast as possible and builds out the otherwise short core experience. 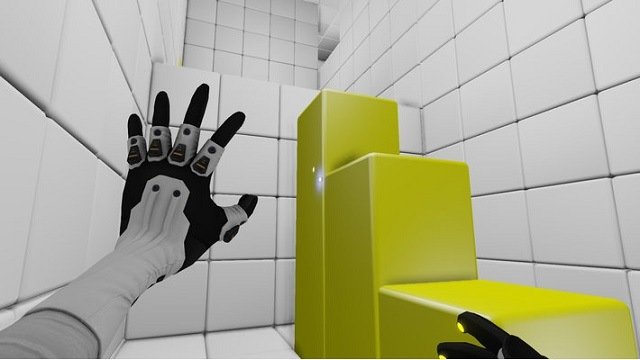 While the core campaign is shorter than some similar titles in the genre and the musical score lacks the same progression as the puzzle mechanics QUBE’s interesting environment and the variety of puzzles created with 3 core puzzle mechanics ensure it’s a worthwhile puzzle adventure.