Quern – Undying Thoughts offers a story of mystery and unique puzzles as you attempt to unlock the story of Quern’s past after becoming trapped on the island. After stepping through a strange portal that quickly zaps closed after you take your last step forward you’ll be trapped on Quern island. With a strange blend of technology and almost magic littered across the island the game’s presentation offers a unique blend alongside it’s interesting world based approach to puzzles rather than the more self contained puzzles of other titles. Similar to other first person puzzle adventure games Quern – Undying Thoughts challenges players with a long journey filled with ever increasing complex puzzles which slowly reveal the mystery beneath the island you’re stuck on. A common theme adopted by Quern in addition to the world linked puzzles is the use of related and reusable mechanics that helps build a level of game world realism and greater connection.

This combines with beautifully designed and interesting locations that all serve as an impressive Quern location although this does come at the cost of more bland connecting paths with the added focus on points of interest. This is somewhat counter acted by the first person controls which allow you to focus your attention towards the horizon and your next landmark rather than the basic landscape that scatters alongside the branching game paths. 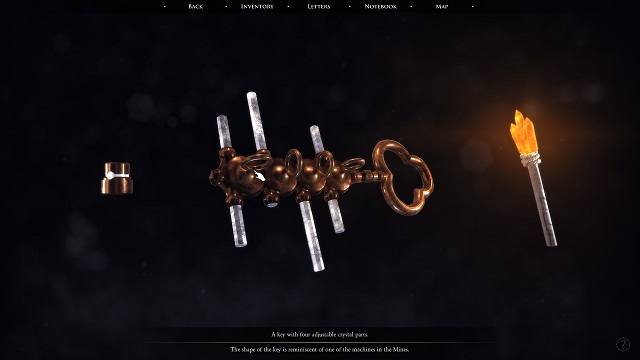 The opening game sequence and overall setting is very reminiscent of Myst with players sent to an unknown island through a gateway like portal that leaves them with no way of escape. Players are beckoned towards the locked doors before them though which are clearly linked to your possible escape. With a multitude of puzzles standing between you and the locked your Quern adventure begins.

Players are not the first person to step foot in the island of Quern though as you follow the stories, direction and notes of the previous explorer than found themselves on Quern. With these journals you’ll be guided around the island and sometimes even given clues to what awaits. These sit alongside your very own notebook that players can make notes on which will prove invaluable due to the connected nature of puzzles in the game world. 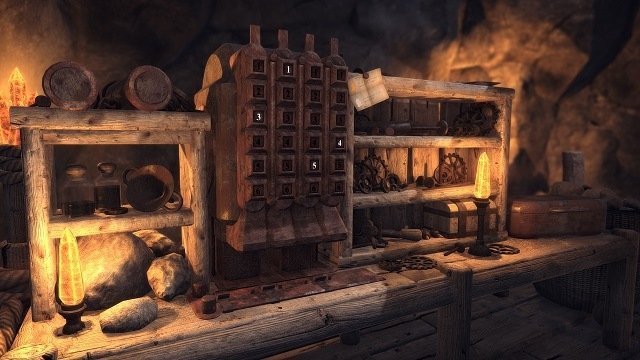 Most of these areas are contained around a central hub village near your starting location which features grand (and strange) architecture that feels almost alien in design. Just like the games that have come before it everything is familiar but also strangely foreign at the same time with normal objects used in peculiar and unique ways to create an aesthetic that is unique to Quern.

The primary game mechanic of puzzles is equally well executed with most puzzles being solvable in a logical fashion bar a few. You’ll only encounter a small handful of puzzles that don’t make sense or have loose ties to the adventure component that make it near impossible to link together. The growth and pace of new ideas and mechanics in the puzzles themselves is particularly well done, ensuring a new challenge most of the time. The only downside to this design is the excessive use of backtracking between environments due to the larger scale puzzle design involving multiple locations.

Games Finder is a Steam Curator and featured in the aggregate review scores data of MobyGames and Neoseeker.
FEATURED ON
Games Like Dear Esther, Games Like Gone Home, Games Like Myst, Games Like The Room
LEAVE A REPLY Cancel Reply