Bringing action and platform gaming to Xbox 360 Raskulls is a game of comedy and fast paced gameplay. Navigate through various levels as you destroy blocks of all sorts on the way to the end of the level in the fastest manner possible. 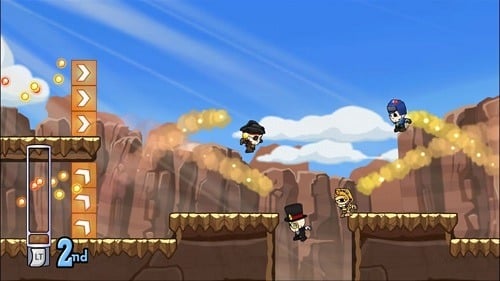 Taking place on the fictional home world of the Raskulls an evil race of pirates has landed as they hunt for the planet of cheese. Requiring a powerful fuel source to restart their adventure they learn of the existence of the Shiny Stone that that Raskulls hold and attempt to claim it for themselves.

On top of this story based experience players can engage in competitive multiplayer which supports up to 4 players. Gameplay in both options is predominately the same with players moving through levels with platform elements in an attempt to go from start to finish in the fastest time possible.

The central mechanic is the block breaking wands that each Raskull possesses which can break down a variety of blocks spread across these levels. Block types include colours (which can be cleared quickly at once with a single zap) and hard blocks that are grey, requiring several zaps and will explode if too many touch. This combines with other mechanics such as water, frenzy and items. 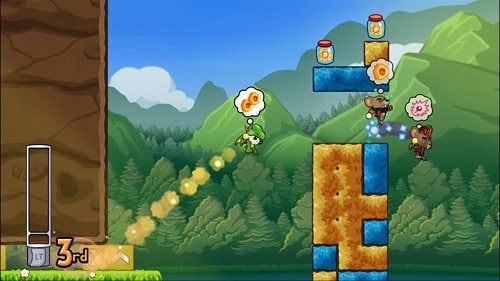 Items include powerful attacks like Mega Zap which stuns other Raskills, Flame Charge that lets you power through several blocks and Ghosty which makes you invisible to other players. Meanwhile frenzy mode lets you run and shoot faster and fills up over time or with boosts.

While basic Raskulls uses all of these mechanics in various ways through both single player and multiplayer levels. Although all of this is taken to its real potential in the multiplayer scene as real players test your racing skills.