Re: Alistair++ is a free game like My Candy Love. The game is one of the few English romance and dating (otome) games available and paired with the free price tag its a winning formula for sucess. 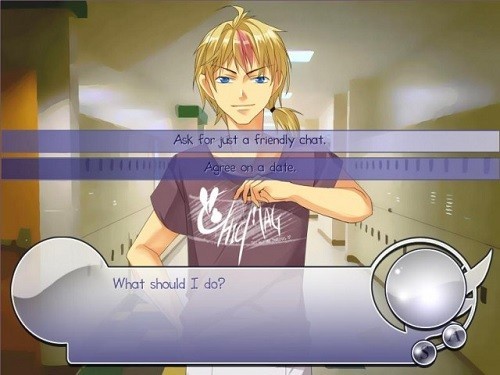 Re: Alistair++ is published by SakeVisual and since its release in 2010 the game has been translated into German and Russian game versions.

The game plays out like a visual novel and has players taking control of the main character, Merui Lucas. It is up to you to make the day to day decisions that Merui will face and these decisions will impact on your romantic interests and relationships with the characters in the game. Merui Lucus is a 16 year old girl that loves playing video games, she can often be found playing the popular MMORPG of Rivenwell Online.

Like most romance based games Re: Alistair++ features multiple endings which forms the basis of the replay value as players attempt to romance all the potential love candidates.

The game takes place after a boy from within the game (under the name of Alistair) takes a rare item from her character in the online world of Rivenwell Online.

After this point she swears on revenge and narrows down the suspects to three boys from her school. These three boys (Derek, Travis, Shiro) form the basis of the story with romances potentially developing with any of these characters. 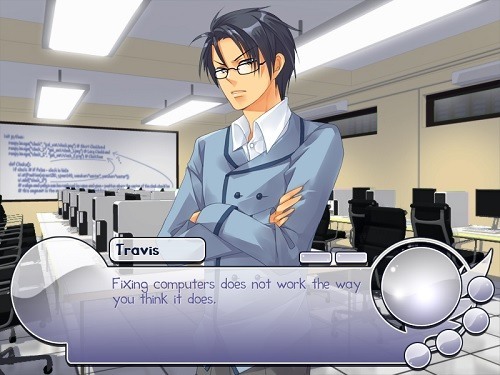 The potential romances all have their own unique backstory and personality which make your choices a much more realistic experience. From Derek the basketball player to Travis the computer president and Shiro the shy classmate there is something for everyone.

Re: Alistair++ will definitely pull you in with its storyline, characters and impressive artwork making it a must play for otome fans.

This review was first published on April 23, 2013. Read our update policy to learn more.