Rescreatu is an online virtual pet game that takes place across a number of planets and focuses on the hunting and hatching of monster eggs in order to collect all the available creatures and colour variants. Along the way players can also complete quests, make friends and participate in the in the game economy which rounds out the mixture of virtual pet game and social experience. While not as popular as some of the larger players in this niche genre Recreatu has maintained an active audience of several hundred players for the last few years. 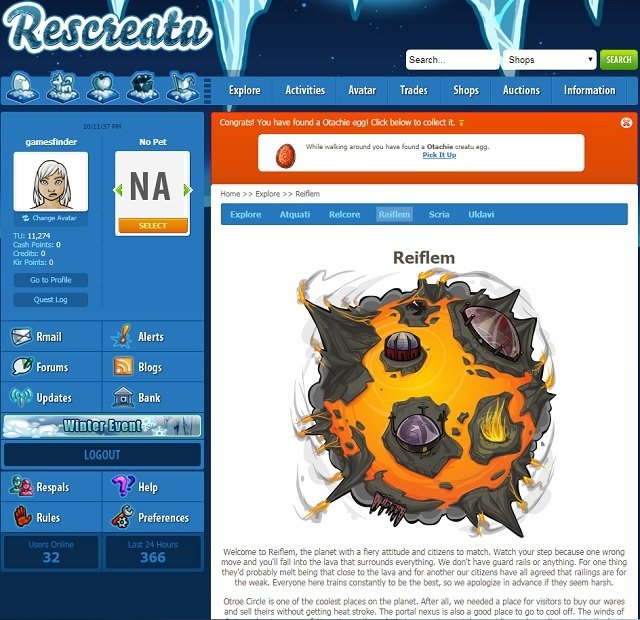 Your connection to the world of Rescreatu is your customisable avatar which is created right after joining the Rescreatu universe and offers some significant customisation along with a class and home planet options to give you a visually and mechanically distinct character for the social elements. While this class option only offers 2 classes (merchant and rancher) it can have a significant impact on gameplay by altering the primary methods of generating in game currency and is a nice added layer of customisation well beyond other virtual pet games.

On the one hand ranchers can hatch up to three of the eggs they find each day with a higher chance of rare colours which can be useful in finishing your collection but also provide a source of game currency (TU) by releasing unwanted pets for sale. Meanwhile merchants gain a permanent 10% discount at all NPC stores but are limited to a single hatching per day but can quickly complete item based quests with better margins. While possible to swap between the two job roles as you wish this can become prohibitively expensive to do so constantly. 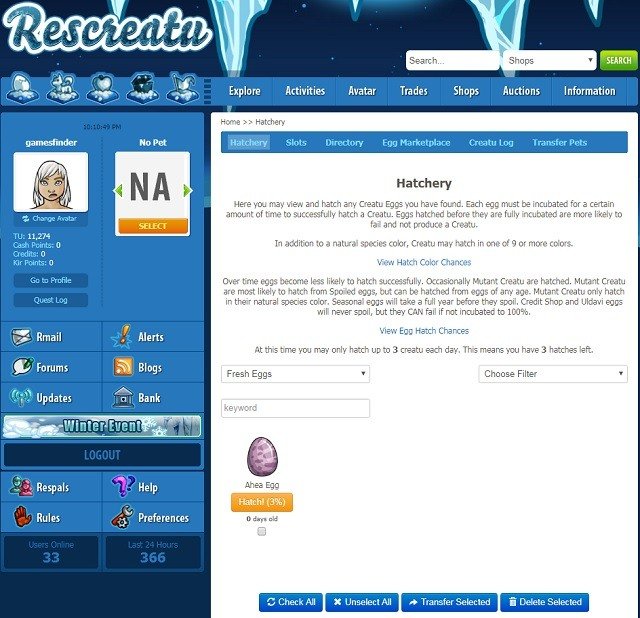 Regardless of your class Rescreatu is primarily focused on achieving one goal, the collection of every single possible Creatu (the name for creatures in Recreatu) and their various colour variants. In total there are nearly two dozen base creatures with their own lore and visual appearance with another layer of colour variants to collect such as blonde, black, albino, cream and silver. Your progress to achieving this goal is summarised on the collection tab of the Rescreatu interface which provides a handy checklist of your progression.

All of these creatures come from eggs which can be found randomly around the website, awarded for quests or bought directly from player ranchers. Each egg has its own incubation period that ranges from less than an hour to several hours will also having a specific rarity number to help provide an indicative price for the market. Other gameplay mechanics in Recreatu are on par with the browser based pet game market with the ability to raise and train your hatched Creatu, establish player shops, accept a range of quests, participate in games and visit an array of planets with their own unique designs and locations (Scria, Relcore, Reiflem and Atqua). 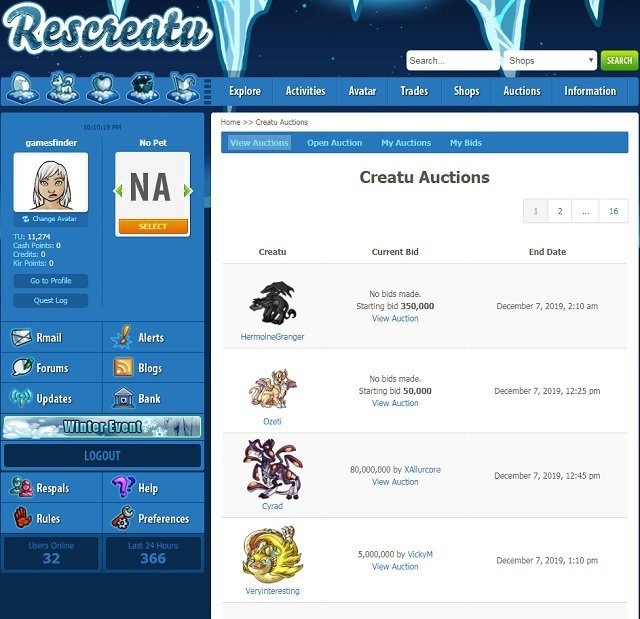 Despite the smaller community size Recreatu is still active enough to be an enjoyable experience and ensure you can engage with all the games intended mechanics. The fact that it is based around a unique hatching experience that few other games implement also ensures it stands out from the other online virtual pet games.

Games Finder is a Steam Curator and featured in the aggregate review scores data of MobyGames and Neoseeker.
FEATURED ON
Games Like Howrse, Games Like Neopets, Games Like Pixie Hollow, Games Like Webkinz
LEAVE A REPLY Cancel Reply