With an impressively large collection of offline missions and colourful multiplayer Respawnables appeals to both sides of the fence. Jump into the impressive shooter experience for iOS and Android devices. 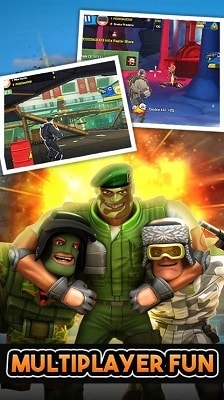 Wasting no time on letting players choose a match Respawnables allows your level 1 character to join matches of either free for all or team deathmatch. For successful completion in either of these modes players will earn experience and cash which allows new weapons to be unlocked.

While this does lead to a few tough early levels as players face off against higher level opponents with stronger weapons and equipment the bulk of your early experience is given for finishing matches which lets you quickly gain levels, accessing more weapons and maps. All up there are 9 game maps which slowly unlock with play up to level 30.

Equipment wise players can select from hair styles, jackets, pants and gadgets with clothing items giving small boosts to stats like health, accuracy and agility which again compounds the problem of level disparity between players. The inclusion of expensive in app purchase armours with massive benefits is also not ideal although are expensive enough that you don’t see them in game often.

Given this players are best off starting their Respawnables journey in the combat arena where you’ll face off against bots that are generally quite weaker than their real human counterparts, combined with the hundreds of missions for completion in this mode such as reaching point targets, killing a number of enemies per watch, staying alive for a period time and much more you can easily rack up experience and money. 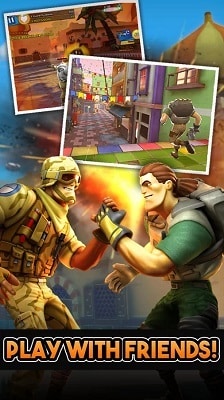 In terms of actual gameplay Respawnables is impressive for a mobile shooter with solid controls and just the right amount of aim assist that helps you lock onto targets that are already near your cross hair for a more fluid experience. A unique and much appreciated mechanic is enemies dropping points upon death which helps to counter camping by having players move around to secure full points and win the current match.

For a good all around shooter on your mobile that offers plenty of single player content along with a strong community for multiplayer matches Respawnables delivers.

Games Finder is a Steam Curator and featured in the aggregate review scores data of MobyGames and Neoseeker.
FEATURED ON
Games Like Pixel Gun 3D
LEAVE A REPLY Cancel Reply