Robot Roller-Derby Disco Dodgeball places you inside various dodgeball arenas and game modes against other players (or bots) as you catch dodgeballs and throw them at your enemies. Focusing on fast gameplay and trick shots it is available across Windows, Mac and Linux. 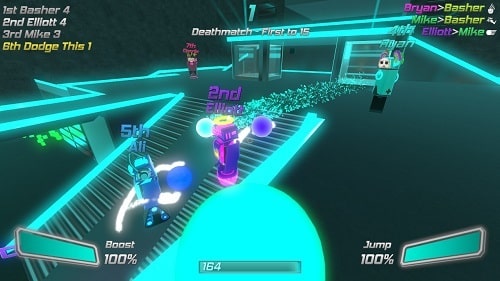 Gameplay is deceivingly simple on the surface as players command a single wheel robot across a range of colourful of maps in first person. This movement is very momentum based which aids the fast paced nature of the game while also giving you flexibility in dodging with the likes of jumps and fast acting brakes.

Following traditional dodgeball rules players are knocked out of the game when hit by an incoming ball but can also knock out the person by catching their ball. Points are earned for every opponent you take out of the game and can be increased by performing trick shots with things like ricochet and throwing the ball from the air. There are a total of 24 trick shots available with various point rewards which tie in closely with the garage which lets you buy short term boosts and achievements for cosmetic upgrades (which are also available as random drops). 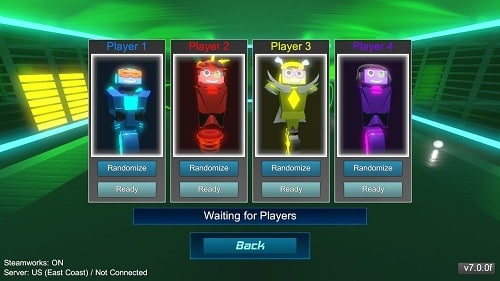 Modes available within Robot Roller-Derby Disco Dodgeball include your standard deathmatch with customisable death limits, score battle where you compete for maximum points, round based elimination, a basketball style game called hoops, super ball which sees your team attempting to control a special ball, grand prix which adds in racing elements and horde which sees you face against countless waves of bots.

The sheer pace and variety of Robot Roller-Derby Disco Dodgeball makes it an enticing game although the age of the game makes the high quality multiplayer games at launch few and far between. Thankfully the co-op and single player modes do pick up some of the slack.