Royal Defense will put your tower building skills to the test against hordes of trolls on behalf of the dwarf kingdom. With the impressive level design and 3 distinct difficultly levels there is more than enough content to enjoy for the price point. 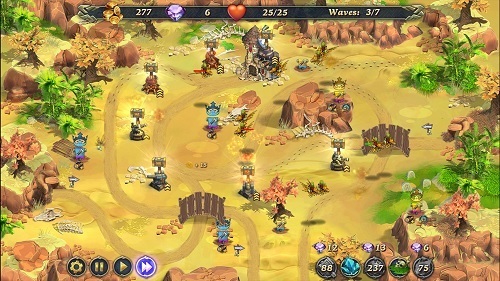 In each level of Royal Defense you’ll be tasked with defending your headquarters by building a range of towers that bring their own strategic advantage to the battlefield. Some will be able to slow down enemies, annihilate ground troops or are perfectly suited to counter flying units. By placing these towers on the available building locations, upgrading them and combining towers together you can craft a strategy to overcome each level.

Royal Defense isn’t the sort of game where you can randomly place towers down either thanks to the finely tuned strategy that forces you to think about placement carefully. This is where the map design in particular really shines with most maps having multiple paths and several loops that enemies will walk along. For every enemy that you do manage to kill you’ll get gold coins to build and upgrade your towers or gems to be spent on tower upgrades that persist through every level.

Tower upgrades in particular must be carefully considered if you’re going to stand a chance at the hard difficulty setting or in one of the various challenge maps. These upgrades range from additional stronghold health, extra gold from slain enemies, attack rate, damage and plenty of other passive boosts. With all these upgrades you do sometimes feel forced to replay levels to farm gems if you find yourself stuck which is something not all players will enjoy. 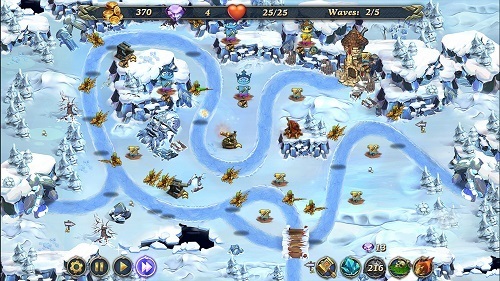 Other notable mechanics in Royal Defense include a variety of spells, the ability to tag enemies so that towers focus them and unique royal building sites that can dramatically enhance the power of a tower but will cost you gems to build on.

Royal Defense is a solid strategy experience with great map and enemy variety keeping it interesting over the long term. It’s far from perfect though with a mediocre PC port, little tower innovation and the need for level grinding dragging the game back into average territory.

This review was first published on November 14, 2014. Read our update policy to learn more.