Shadow Warrior (2013) remakes the highly popular original game which was released in 1997, sharing the same name and core gameplay although modernised. While Shadow Warrior is fundamentally a first person shooter players will also need to rely heavily on their melee combat abilities which is both highly effective and visually appealing. 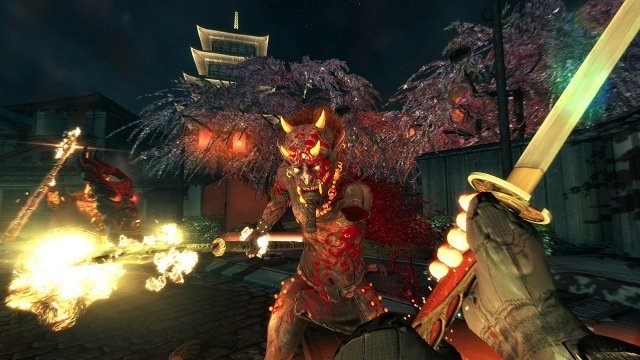 In this demonic adventure players will assume the role of Lo Wang, a Japanese assassin who has a range of specialties that make him one of the deadliest in the demonic and human world. After a deal to purchase an ancient katana turns bad he finds himself captured before quickly escaping when a realm of demons opens up in front of him and consumes the compound he is caged in. At this point he allies with a masked demon named Hoji who explains the origins of the sword called Nobitsura Kage which is capable of killing immortal beings which makes it of particular interest to the demon factions.

Revealing to players that the Nobitsura Kaga is actually the combination of three different swords Wang opts to hunt down these pieces with Hoji and adventure into the demon world to slay evil for good. This quicks off your journey for the other pieces of the swords which along the way players fight a number of magical golems known as Whisperers who fill in the game lore gaps as you progress. 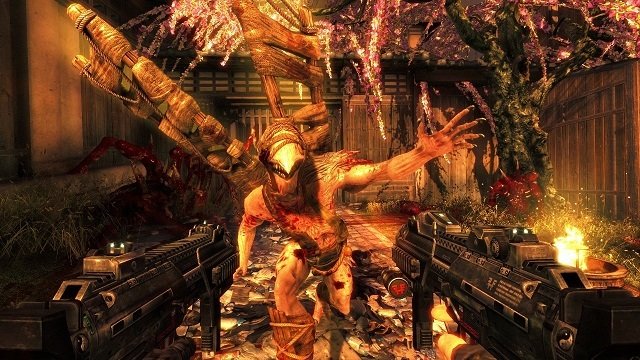 Gameplay in Shadow Warrior takes place in a first person perspective which allows you to get up close and personal with a variety of demon and human enemies that Wang faces. Wang can use a wide selection of ranged weapons with the majority being highly destructive such as shotguns, rocket launchers and explosive crossbows. Your signature weapon though is a powerful katana that can behead enemies and offers a range of different melee attacks of varying effectiveness based on your key inputs with a recurring mechanic around tailoring these attacks against your enemy and the number of enemies.

Enemies are equally varied with different strengths, size and attacks to counter with your arsenal of weapons and ensures that Shadow Warrior is more than just a run through the shadow realm slaying everything the same way. With mixtures of ranged enemies, charging enemies and ones that debuff Wang you’ll have to consider how you approach each of the games environments for best success. Littered between these levels are also a number of unique boss fights that ramp up the difficulty although highly rewarding when you earn a takedown. 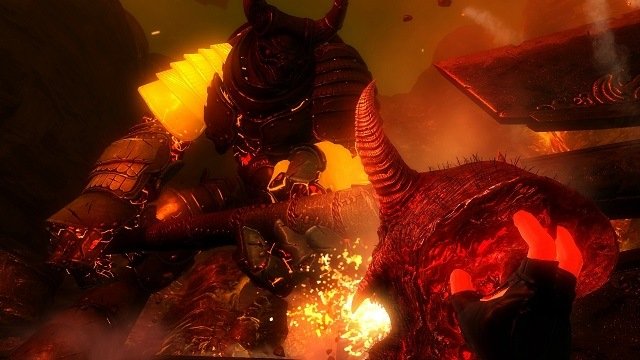 Basic RPG features in Shadow Warrior give the game a further sense of progression with players improving both their weapons and abilities within the game and let you battle the increasingly powerful demon variants. Currencies within the game includes money which is primarily spent on weapon modifications and ammunition types, Karma points which are gained for combat proficiency for skills and passive boosts to your damage and rarer Ki Crystals that lie waiting in hidden locations and provide entirely new powers. These hidden locations are off the beaten path of Shadow Warrior which otherwise is a fairly linear adventure with plenty of scripted elements. For melee orientated gameplay with a demonic theme this reboot achieves the goal of reviving the franchise.

Games Finder is a Steam Curator and featured in the aggregate review scores data of MobyGames and Neoseeker.
FEATURED ON
Games Like Bloodborne, Games Like Chivalry: Medieval Warfare, Games Like Dark Souls, Games Like Doom, Games Like For Honor
LEAVE A REPLY Cancel Reply