Shakes and Fidget offers a unique mixture of RPG and fortress management allowing players to take on quests, fight in PvP and ultimately develop their ideal character in a satire fantasy world. Available on both mobile devices and your computer (either as a browser or PC/Mac) Shakes and Fidget has built an audience in the millions who have formed guilds on their journey to the top of the Hall of Fame.

Shakes and Fidget opens with players selecting from the five available classes of warrior, mage, scout, assassin, battle mage and berserker who come with their own playstyle and preferred stats. On the one hand you’ve got the warrior who receives 50% reduced damage and has a 25% to raise his shield to block damage while the scout has a massive 50% chance to evade while having a smaller 25% damage reduction. 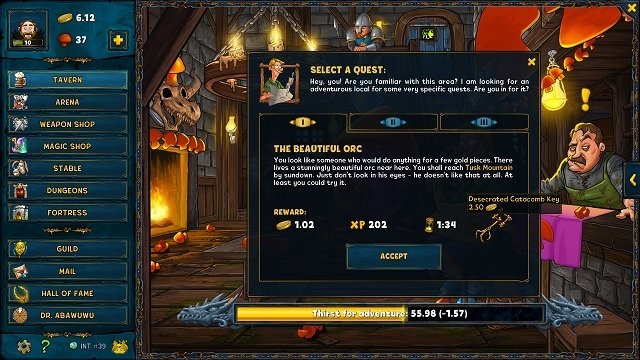 Your choice of class also has a clear impact on the five stats utilised by Shakes and Fidget of strength, dexterity, intelligence, constitution and luck with each of the aforementioned classes having a primary stat you’ll want to focus on levelling (such as intelligence for the mage). Each of these stats also impact combat more broadly with strength boosting defence, dexterity boosting your evasion, intelligence modifying spell damage, constitution providing more health and luck contributing to your critical hit chance.

Post your class selection Shakes and Fidgets offers up 8 different races (human, elf, dwarf, gnome, orc, dark elf, goblin and demon) that further alter your stats which creates an ideal min-max combination of class and race. On a visual front this race alters your phyiscal appearance with further customisation available through eyes, beard, mouth, eyebrows, nose, ears, hair, hair colour and extra items (scars and eye patches). With the range of quirky options you’ll quickly dial in to the tongue-in-cheek style of humour that you’ll find throughout the rest of Shakes and Fidgets.

With your customised character in hand you’ll begin your adventure in the humour filled fantasy gameplay of Shakes and Fidgets while bring greeted by the voice acted Shakes himself to guide you through your first of hundreds of quests. These quests are the foundation of Shakes and Fidgets providing you a source of gold, experience and items in exchange for depleting your thirst of adventure which can be restocked through a tasty drink from the bartender. 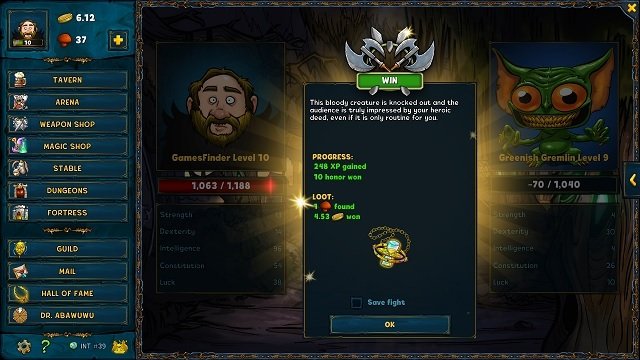 Accepting quests from the tavern you’ll find a range of NPC characters that offer you 3 quest choices that have their own reward of gold, experience and sometimes items alongside their own variable length of time that it will take to complete the quest. While often you’ll find that one quest option provides the best value for your time sometimes you’ll have to weigh up if you want experience, gold or a powerful new item as you can only select one of the randomly generated quests to complete.

From here your character will be tied up for a period of time (usually around a minute) as they complete the adventure which concludes with an auto battle against an enemy. By investing in stronger mounts players can reduce the time taken to complete quests although this requires an upfront investment and needs to be refreshed every few days.

During this downtime players are free to change their equipment, visit other game locations and level up their stats while mobile and browser versions offer an option to earn lucky coins from the adventuring screen (not available through Steam version). Your progress between versions does carry over though allowing players to use both their mobile phone and computer provided they create an account (email address and password).

Your long term objective to these quests comes in four forms in Shakes and Fidgets with a PvP arena, Hall of Fame, dungeons and a fortress mechanic. In PvP you’ll pick from 3 other players as opponents with earns you a healthy amount of honor and gold with an equally devastating result for losses. This honor leads to one element of the Hall of Fame with several leaderboards for the various game elements for players to fight over. 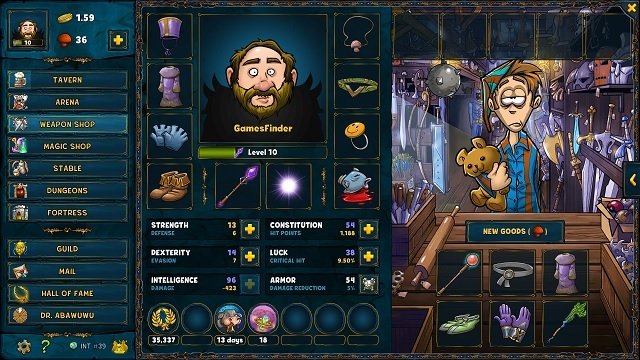 Meanwhile dungeons see you facing off against powerful bosses well above the strength of your standard quests and provide a great sense of progression with around 100 dungeon levels across 9 distinct dungeon settings that require strong equipment sets, potions and rune embedded items for success. Finally the fortress is the backbone of your adventure and is unlocked at level 25 so expect to be several hours in before you’ll be able to tinker with it and allows for troop training, resource generation and other passive character benefits.

With a wealth of RPG mechanics to explore, the humour sprinkled throughout and the motivation to reach the top of the Hall of Fame Shakes and Fidgets is a standout option in the browser and mobile for role playing adventure and kingdom management titles.

This review was first published on March 14, 2020. Read our update policy to learn more.