SimLife: The Genetic Playground is an old computer game produced by Maxis in 1992. The game has the player creating their own ecosystem of fauna and flora. 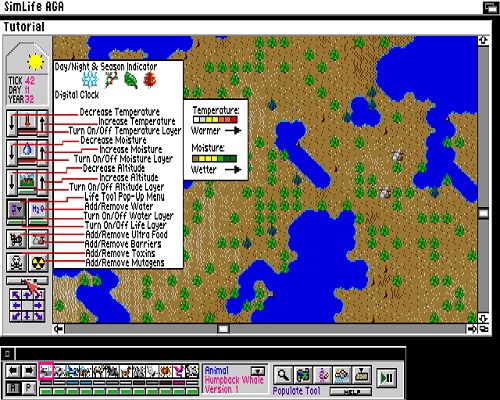 SimLife: The Genetic Playground is all about experimentation with genetics to design an ecosystem that is completely self-sustaining (something that is definitely not an easy task). In order to achieve this players are given tools to modify the DNA of plants and animals while also having the ability to change a variety of environmental factors.

Things that players can alter for animals include their choice of food (fruit, plants, meat, organisms, nectar), the number of children they give birth to, their preferred travel method (flying or walking) and the animals overall intelligence which changes behaviour.

Exploration also forms a major part of gameplay with players exploring the inner workings and relationships between the environment and the life-forms in their game world. Players can simulate a variety of different ecosystems and modify them to replicate real world locations or create something entirely new.

This joy of creating something new isn’t limited to the environment though with players easily being able to change DNA of well known animals and transform them into something that is completely unrecognisable. Sometimes this change is also completely out of your hands as the game’s evolution system takes over and has animals and plants trying to out evolve each other to stay on top of the food chain. 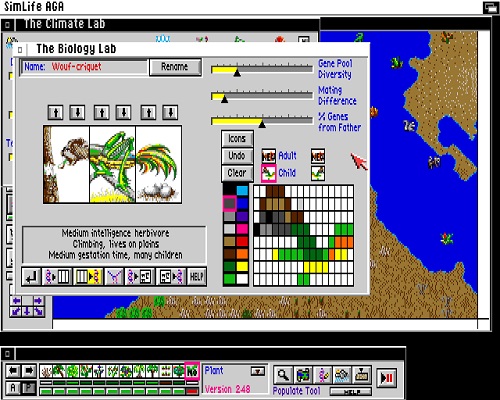 Game modes in SimLife: The Genetic Playground include a tutorial which you’ll definitely need if you plan to achieve victory, an experimental mode where you can run wild and a scenario mode that gives you certain objectives to work towards.

Despite its age the game is still impressive by today’s standards provided you can look past the dated graphics and have the computer knowledge to turn on compatibility mode.