Skullgirls is a 2D fighting  title available across a large breadth of platforms. Originally released in 2012 the game has since been expanded with Skullgirls Encore and 2nd Encore for applicable platforms. 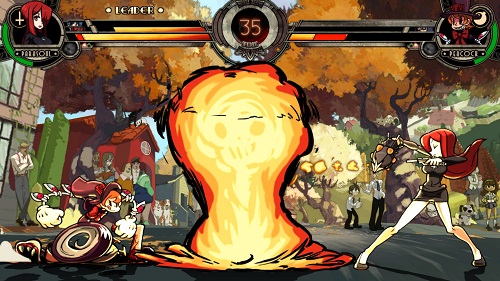 Set deep within the fictional Kingdom referred to as Canopy which resembles a postwar America. Centred around a unique artefact known as the Skull Heart which grants a wish to a woman every 7 years provided they are pure of soul. Those that are deemed not worthy of a wish are turned into a monsterious beasts known as a Skullgirl. The game kicks off after the newest Skullgirl (Marie) has risen with various fighters journeying to take out Marie and claim the Skull Heart for themselves.

The core game features 8 playable fighters which can be used across the story, arcade and versus modes. Actual fighting across these modes is extremely tight and responsive although the unique art design will take some getting use to as you separate the background from the characters. This is not a negative of the game though and simply due to its uniquely hand drawn aesthetic.

In terms of mechanics you’ll recognise many of what Skull girls utilises from other titles such as tag team based combat, assists and delayed hyper combos. 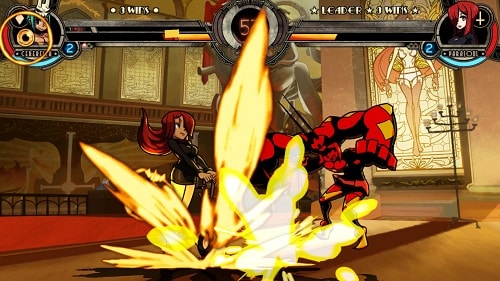 Uniquely Skull girls allows for teams of different sizes which are then balanced accordingly by boosting health and attack as necessary if you choose only a single fighter, although you lose the benefits of assists. Other mechanics are designed with new fighting players in mind with balance addressed by looping combo detection and protection against the likes of unblockable attacks.

The overall result is a Skullgirls fighting game that is fast paced and adequate for veterans but also accessible to newcomers who want a more friendly fighting game for their first time.